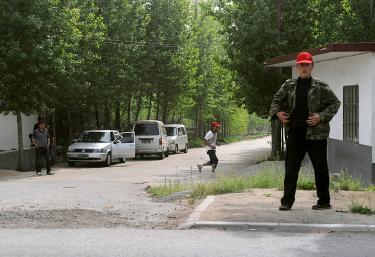 Remember how, during the saga of blind activist Chen Guangcheng, authorities resorted to the basest means to intimidate and punish him? You’ll surely remember Chen Kegui, Guangcheng’s nephew, who was arrested for attacking goons with a knife — goons disguised as police (or is it the other way around?) who were sent to his house to harass him, his wife, and their feverish six-year-old child. Kegui immediately turned himself in, and while his uncle and father were both able to escape the confines of Linyi, he has remained locked up, the only body available for local authorities to punish.

And punishment is forthcoming, it appears. Steven Jiang of CNN reported on Monday:

Chinese police have sent the criminal case involving the nephew of prominent blind human rights advocate Chen Guangcheng to the prosecution, signaling a possible trial soon, as well as continued official retribution against the activist’s relatives, Chen and his family said.

“The local authorities are now declaring war on justice and the conscience of the international community,” Chen Guangcheng told CNN over the phone from the United States, where he is studying law at New York University. “They’re trying to separate his case from mine, but that’s impossible.”

Chen Guangfu, the activist’s older brother and the nephew’s father, hasn’t been allowed to see his incarcerated son since his arrest. He said he learned from a government-appointed lawyer that police downgraded Kegui’s alleged crime from attempted murder to “intentional infliction of injury” when sending the case to the prosecution.

“There has never been any fairness in this case — they ignored the facts and refused to let us appoint lawyers for Kegui in accordance with law,” the father said. “The whole thing is their revenge against Guangcheng’s escape, so I don’t have any hope for a fair trial.”

Fairness in Linyi seems like a quaint notion. This Shandong village, after all, couldn’t find enough capable men to keep a blind lawyer from hightailing it to Beijing, and later failed to keep an eye on his elder brother as well. They’ve been made fools of, and now they want retribution. When they tried to shake down an innocent man — Chen Kegui — they were thwarted, rightfully so, but instead of giving Kegui a chance to defend himself in court, they decided to deny him even his own lawyer.

So here’s what we have: local authorities using the justice system to mete out official punishment to the man who got away — a man currently in New York, safe in every way except the mind and conscience. Don’t you just love justice?

One Response to “Chen Guangcheng’s Nephew, Chen Kegui, May Be Prosecuted Soon”