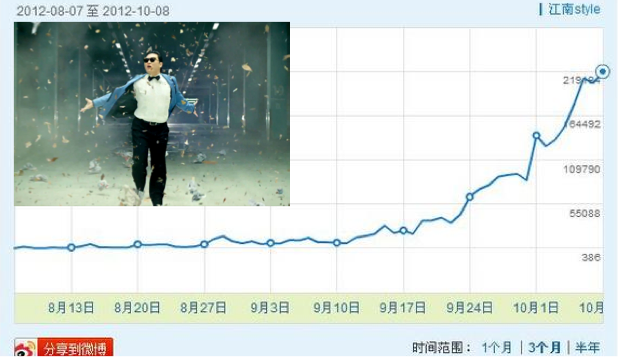 Resident Sina Weibo expert Liz Carter of Tea Lea Nation has been — for some mysterious reason that we should not question — tweeting Gangnam Style statistics in the last hour, we can only imagine furiously.

In the following tripartite of infograph tweets, we learn that:

1. All things considered, China was quite slow to grasp PSY’s Gangnam phenomenon. You’ll remember that we posted the music video in July, when its YouTube view count was still in the low seven digits. But searches of “Gangnam style” on Sina Weibo didn’t take off until mid-September.

2. Unsurprisingly, Guangdong province, with its massive cities that attract hordes of hip urban youth, saw the most searches. Shanghai and Beijing are Nos. 2 and 3, with Jiangsu province lagging behind at a relatively distant fourth.

3. Women prefer Gangnam significantly more than men (59.1 percent to 40.9 percent). Strangely, Scorpios (October 23 – November 22) like it most, while Aries (March 21 – April 19) like it least. It’s not strange because of the Scorpio/Aries thing, but the margin (unless I’m misreading what the piechart sizes represent).

All this is fine and dandy, but it leaves us with just one question: forget ball kids; when’s Wen Jiabao gonna break out his invisible horse?

According to Sina Weibo, “Gangnam Style” is most popular in Guangdong, Shanghai, and Beijing twitter.com/withoutdoing/s…

Sina Weibo also finds “Gangnam Style” is more popular among women than men, and most popular among Scorpios and Libras twitter.com/withoutdoing/s…

Stats were compiled by looking at searches for “Gangnam Style” (Chinese: 江南style). Hopefully Liz can enlighten us further in regards to methodology.

Leave a Reply to Liz