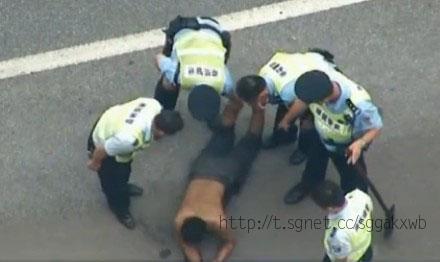 Video after the jump.

Remember the cannibal/zombie craze that swept across the world over the summer, starting with Rudy Eugene chewing a homeless man’s face on a Miami highway on May 26, followed by Alexander Kinyua eating a murder victim’s heart and portions of his brain, followed by Luka Magnotta (the less said about this one the better)? The trend, if you can call it that, seemed finally to end on June 26 with the face-chewing of a female driver surnamed Du in Wenzhou, Zhejiang province, by a drunk bus driver surnamed Dong. “Doctors at a nearby hospital said Du will need plastic surgery to repair the damage from the bites on her nose and lips,” reported Shanghai Daily, and that was that.

Ah, if only. Look what we have here in Foshan, Guangdong province:

The victim, surnamed Pan, told Guangdong TV news that the man, naked to the waist, accosted her on the street on Saturday afternoon, pushed her into a corner and started to gnaw on her face.

According to police, the middle-aged man wielded a long shovel and was seen attacking random people that day. Apparently a terrible wielder of shovels, he preferred his teeth as a weapon, because he then tried to bite the arm of a cop:

“The man beat a police officer when he tried to catch him and tried to jump on a passing truck to escape,” said officer Zhou Houjin, “We caught him after he failed to jump on the truck.” Zhou said the man appeared to be in a frenzy as he bit him on the arm. Police said the man was sent to a hospital to see if he is mentally ill.

If he is mentally ill. I’ll put a bet on “probably.”

3 Responses to “Face-Biting Again In China, This Time In Foshan”