In Guilin, Guangxi Autonomous Region yesterday around 10:30 am, a foreigner who is initially identified as “a black man… dressed completely in jet-black” was filmed attacking random people at Wenchang Bridge. The Youku description (video embedded after the jump) tells us that an “approximately 80-year-old, white-haired elderly woman was picked up by him and thrown to the ground.” You can see it in the video just past the one-minute mark, and yeah, it looks terrible. A Chinese man then appears from the bottom of the screen and intercepts this man. The foreigner flees and is chased, while others come out of the woodwork to kick him as he flies past.

Netizens at first assumed he was African, but according to this writeup via GLTVS, a journalist learned from police that he’s actually a 51-year-old from France. (African/European misbehaving on tape… hmm, where have we seen this before?) The man is currently in police custody; the reasons for his behavior are as yet unknown.

Here’s a good peek at what he looks like, via a Guilin message board: 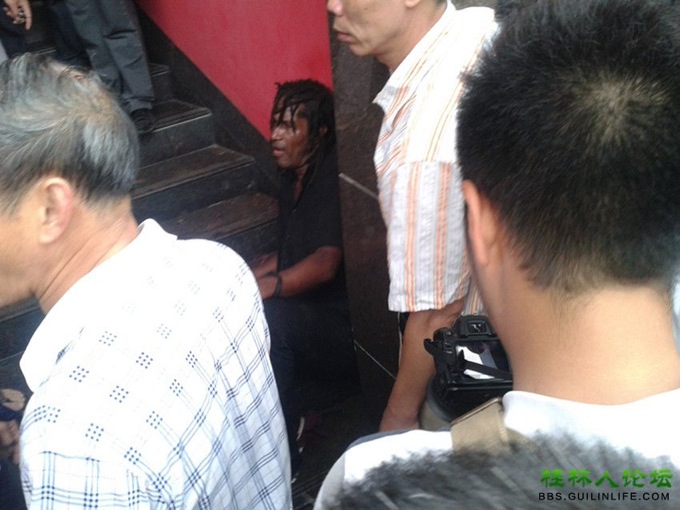 Update, 1:55 pm: GLTVS article, translated in part (errors are mine):

By the time this journalist arrived at the scene, police had already rushed over and taken the offender away. Although the crowd that had gathered had largely dispersed, those who lingered were still extremely upset about what just transpired. One resident told this journalist about the entire affair:

Eyewitness: I was coming from over there when I saw a black-haired, very dark man cut off someone to have a word. And then here comes a man, an old man, almost 60 years old, [the foreigner] presses him to the bridge, ready to throw him in the river, and then the [old man] runs away. After he’s run away, [the foreigner] stands there, there’s no one, and by that point someone had already called 110 [the police].

But while cops were coming over, this foreigner would carry out yet another act of violence.

Eyewitness: “At this time, someone dialed 110, and here comes another woman, so then [he] grabs this woman and also slaps her and also pulls on her clothes, ripped her clothes from behind, beat her from the front, in total might have attacked six or seven people like this. ([Question] How much time passed?) Time eh? Almost half an hour. In this half an hour, here comes another woman dressed in red, and then the man standing on the bridge nearly tears the clothes right off this woman, and then this woman tears her clothes off and runs away. Afterwards, here comes an old person, it’s a woman, maybe seventy, eighty years old, [the foreigner] seizes this old woman, grabs her by the head, like this, kuangdang [an onomatopoeia to describe things falling] there she goes.”

48 Responses to “Foreigner Loses His Mind, Begins Attacking Random People On The Street Before Fleeing From Those Who Confront Him [UPDATE]”