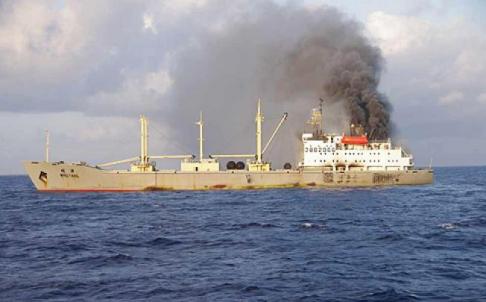 A Chinese cargo ship, the Ming Yang, caught fire last Saturday about 150 kilometers southeast of Okinawa and required assistance from rescue boats. Japanese rescue boats. All 64 seamen on board were rescued before 4 am, with only three suffering minor injuries, the coast guard said, according to South China Morning Post.

China and Japan, of course, have a frosty maritime relationship, notably over the Diaoyu Islands. But as the Japan Daily Press notes, “Xinhua, reported on Sunday evening that a rescue ship was being dispatched to pick up the 64 crew members from the Japan Coast Guard. No doubt they will bring a fruit basket and thank you letter in appreciation for rescuing their Chinese countrymen, despite the two countries’ tensions that have resulted in physical violence to Japanese residing in China in the previous weeks.”