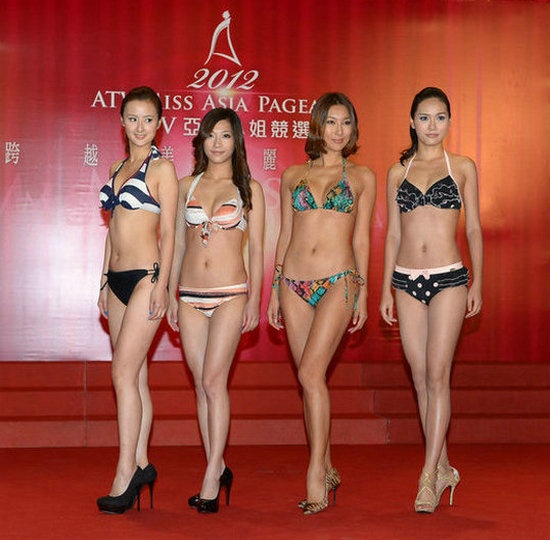 A lot of links today, so let’s get right to it.

Beijingers protest miner’s death in Ghana. “A crackdown in Ghana over illegal mining in the gold-rich nation has killed a young Chinese miner and sparked a rare protest from Beijing, underscoring the challenges of growing Chinese investment in African mining. // The death of the 16-year-old Chinese boy during a raid by the authorities at a mine last week prompted Beijing to demand on Monday that Ghana undertake a full investigation and ‘uphold the safety and legal rights of Chinese citizens and businesses.’” [The Globe and Mail]

Bad cop. “A driver for a police official in Huai’an City of Jiangsu Province has been detained after he was accused of driving on the wrong side of the road at high speeds and knocking down a scooter, killing a woman and her 10-year-old son. // The victims’ relatives told the Oriental Morning Post that the mother and son were still alive after they were dragged down the road more than 10 meters by the vehicle.” [Shanghai Daily]

Subway fights cause trouble. Hopefully we’ll find more videos. “Quarrels and fights between passengers occur almost daily on Beijing’s subway system, and some seriously impact the normal operation of the network, the subway’s main operator admitted Monday. // Beijing Subway, which operates  15 lines out of the total 17, is collecting information on the number of fights between passengers that has affected the smooth running of the subway, media officer Jia Peng told the Global Times. // ‘But the exact number is still unavailable,’ he said. // To date, there have been at least seven fights between passengers that affected the subway’s routine operations this year, the Beijing Daily reported Monday.” [Global Times]

And just when they were beginning to do so well. “Shanghai Shenhua’s entire squad staged an open protest in the full gaze of the Chinese media today, reportedly due to wages going unpaid due to the ongoing equity share dispute. // Not for the first time this season, the club was the setting for a bizarre spectacle as players turned up for their daily training session in casual clothing and walked slowly around a running track rather than engage in any vigorous activity. // According to Shanghai Online news portal, local media who regularly attend the club’s training sessions were ‘shocked’ by the odd scenes. The club’s Chinese players turned up late, with Nicolas Anelka, Joel Griffiths and Brazilian defender Moises turning up even later to join in the leisurely stroll.” [Wild East Football via Shanghaiist]

Mo Yan is set to make a lot of money — and people will make money off him. “The Chinese stock market were also affected, favorably, by Mo Yan’s win. Many stocks related to the publishing and media industry rose on the heels of the news, which experts say was driven by speculators. // A 200,000-character handwritten manuscript of Mo Yan as the script for a stillborn television drama, has seen its price skyrocket to 1.2 million yuan (US$191,000) and has become art collectors’ favorite.” [Ministry of Tofu]

Corollary: A Sina Weibo post by @NoVforMe: “Call for Proof: This is Too Crazy–Pierre Haski, a reporter formerly based in Beijing for the French newspaper Libération, interviewed Mo Yan in 2004. During the interview, Mo Yan said that he is the child of a farmer. During the Great Leap Forward and Great Famine, he ate charcoal to keep from starving. He thanks the military and is still a Communist Party member–even though he’s lost his faith in the Party. When the reporter asked him when he lost his faith, he replied that from that year onward, he only retained his Party membership to avoid bringing on unnecessary trouble.” [China Digital Times]

Chinese politics is a man’s world. “A glance at history suggests it’s easier for a Chinese woman to orbit Earth than to land a spot on the highest rung of Chinese politics. // In June, a 33-year-old air force major marked a major feminist milestone by becoming the first Chinese woman to travel in space. With a once-a-decade leadership transition set to kick off Nov. 8, many now are waiting to see if another ambitious Chinese female, State Councilor Liu Yandong, can win one of the nine spots at the apex of Chinese power.” [Alexa Olesen, AP]

Plain thuggery. “Four Japanese restaurant-goers were assaulted in Shanghai, a diplomat said Tuesday, prompting Japan’s consulate to renew a warning to its citizens living in China as a major territorial row rumbles on. // The four were eating dinner at a restaurant in China’s commercial hub with a Chinese colleague who worked for the same Japanese company last Thursday when they were kicked and punched by a group of people, the Japanese diplomat told AFP.” [AFP]

Hilarity ensues. “A group of art students at the Nanjing University of the Arts thought it was a good idea to create a Resident Evil fan film for a student get together. They proceeded to recreate scenes straight out of video games after hours on school property, bringing in dummy body parts, fake blood and weapons. They pretty much remembered everything necessary for creating a fan film, except warning the night shift security guard that they would be filming.” [Kotaku]

Fuck! There’s a cat meat restaurant? “The death of billionaire Long Liyuan after eating cat meat in a hot pot restaurant in December 2011 made headlines around the world. // But even then it was known that it wasn’t the cat meat that killed him but poison. Agriculture official Huang Guang, who was with him the night he ingested the poison in Yangchun City, was arrested on suspicion of his murder. // Although the restaurant was also suspected of serving unsanitary food, Huang has now confessed to the murder, Southern Metropolis Daily reports.” [The Nanfang]

On Mitt Romney again. “I wouldn’t have thought twice about this story if it wasn’t for the fact that there is an entire industry out there in and around Washington devoted to pushing the scary notion of China as the evil banker that will, at some point in the near future, swoop in and foreclose on the United States. // Mitt Romney, would-be president, has been pushing the hell out of this theme for months now. He commonly tacks on snide comments about borrowing money from China when discussing fiscal policy choices.” [Stan Abrams, China Hearsay]

“Mo Yan and the rise of male-oriented Chinese literature.” [The Atlantic] 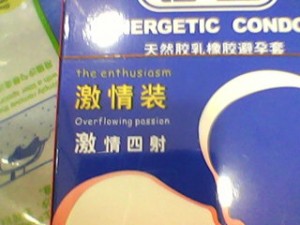 Via David Wills: “The last word you ever need to use in condom advertising is surely ‘overflowing.’ Yet, here it is, from the country that brought you Sixsex and Jizzbon brand condoms:”