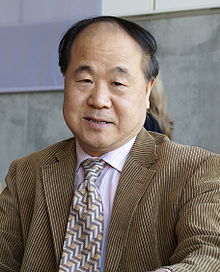 Mo Yan, 57, has made history by becoming the first Chinese citizen to win the Nobel Prize in Literature. Announced mere minutes ago, Mo will become the 109th recipient of the prestigious prize. Reached at his home by phone, he told the Nobel committee he was “overjoyed and scared.”

Mo was apparently co-favored alongside Japanese writer Haruki Murakami. His win will undoubtedly inspire passionate discussion in this country and elsewhere about his merits. Stay tuned.

2012 #NobelPrize in #Literature was awarded to Mo Yan “who with hallucinatory realism merges folk tales, history and the contemporary.”

(Note: Gao Xingjian, who was granted French citizenship in 1997 and won the Nobel Prize in 2000, was the first writer of Chinese ethnicity to win the Nobel in literature.)