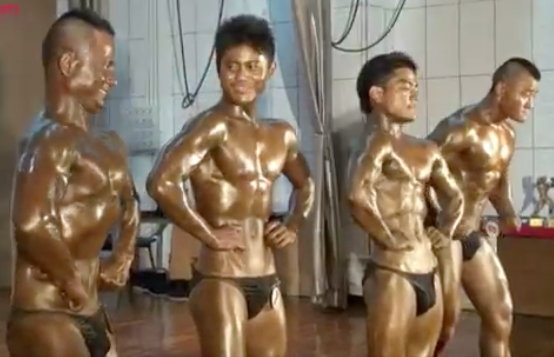 Something called the Mr. Hong Kong Nepal 2012 Bodybuilding Championship — which somehow has been going on for 10 years — happened recently, and was won by Bishwa Bahadur Thapa Magar (though we’ve also seen his name spelled “Bishow Thapa Magar”). We think this contest is for Nepalese men based in Hong Kong. We think.

None of this is really the point, though. The point is: that picture. THAT. Featuring bodybuilders who look more like Gigolo Joe than Jude Law ever could. Those four, whoever they are, brighten the world, and I don’t mean literally, though they certainly are wearing enough bronzer to do that, too.

I screen-grabbed the above from a rather amazing 14-minute video, available after the jump, via a really rather amazing website, JPTHK, the “First Nepalese Online video Magazine.” It’s about as mind-bending an Internet webpage as you will find.

And P.S.: you asked for this post. You know who you are:

So there you have it, “Ria,” if that is your real name.

Or… did you want something attractive? Don’t look to Hong Kong.

3 Responses to “The World Is A Better Place For This Image From The Mr. Hong Kong Nepal 2012 Bodybuilding Championship”