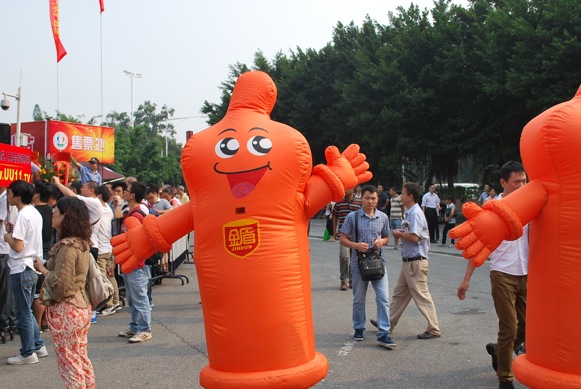 The Guangzhou Sex Culture Festival ended Monday, but we have a couple more related items in the pipeline. For now, check BJC Editor-at-Large RFH’s dispatch about the three-day event in The Times:

…Senior citizens formed a substantial part of the several thousand-strong, mostly male, crowd, handling bizarre devices and garish sexual aids with a blasé air of seasoned knowledgeability. Yet it was only in June that a Xian TV station made headlines after discovering a rare longevity mushroom favoured by ancient emperors down an abandoned well – it turned out to be an artificial vagina. [Ed's note: link not originally in The Times.]

…Indeed, evidence of China’s perennial population-problem was everywhere. A pole-dancer at a lingerie booth sparked unseemly pushing and shoving, simply by scattering free condoms among the crowd; one old man was knocked to the ground, still gripping his enormous Japanese camera. Near by, an impenetrable throng of Nikon-wielding men made enjoying the lingerie show – where an endless succession of long-limbed women paraded to blaring house music – a near-impossibility.

We’ll force that handsome man by later this week to empty his notebook.