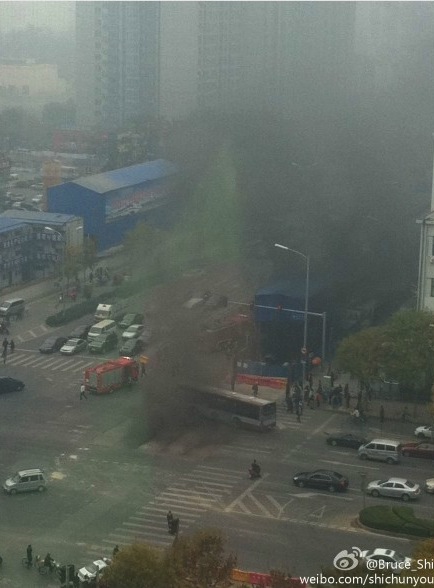 Construction on Beijing Subway’s Line 15 suffered a setback on Friday afternoon after an underground fire halted everything at North Xueyuan Road. Thirteen firetrucks and four firefighting squads were dispatched. No injuries were reported.

Free More News reports via Beijing Fire Department that the cause is believed to be from damage of sewage pipes during the rerouting process. Also, in a separate incident:

Beijing subway construction was not quite smooth in the last few days. On October 22, foams gushed out on roads near Jiuxianqiao Road of Line 14. The construction workers said to nearby residents the foam was a mixture of lubricant and mud from a drilled tunnel.

More pictures via Sina Weibo after the jump. The air quality on Friday was already deemed “hazardous” by US Embassy standards; in this context, the smoke you see in the following images make the city look downright dystopian.