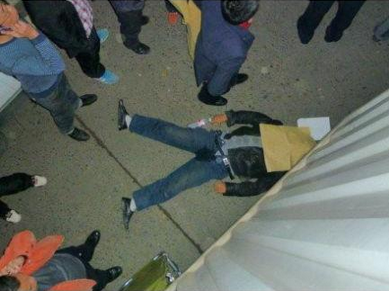 People rioted in Luzhou, Sichuan province on Wednesday evening after they heard that police had beaten a truck driver to death in broad daylight. Tea Leaf Nation relayed several messages from incensed netizens who never doubted it, notably from a Sina Weibo user, @Aluo阿罗, who declared, “Luzhou police have beaten someone to death, causing tens of thousands of onlookers to gather ’round. ….”

Global Times, however, offered an alternative narrative; we honed in on this humorous quote from an official at the scene: “The driver died of an acute disease during the law enforcement process when he was told by the traffic police to remove his truck from the middle of a road.”

Strange as that wording is, South China Morning Post, a sane voice muzzled by its own paywall, published a corroborating account early yesterday:

“At around 5.30pm, I rushed to the scene, which is around 100 metres from my office, and saw that the victim, who was then surrounded by three traffic policemen, was suffering from some kind of heart attack, before asking someone to help him to get his drugs from his vehicle,” she said.

She said the man, in his 40s, was a fish vendor in the street where she worked.

“I left the scene when the man was still conscious after having swallowed two drug tablets,” she said. “When someone told me the man had died, I went back to the scene at about 6.30pm and found out that was true.”

She said she had not noticed any injuries on the man’s body.

SCMP has since followed up with an article about authorities being uncannily proactive in punishing those who spread false rumors:

At least 20 people were detained following a riot in Sichuan on Wednesday sparked by rumours that a man had been beaten to death by traffic policemen, state media reported yesterday.

Gan Junyuan , 58, died from a pre-existing medical condition in central Luzhou on Wednesday afternoon, and not because of a scuffle with police, Xinhua reported.

Local officials told a press conference yesterday morning that Gan had refused to move his illegally parked truck at around 5.30pm when asked to do so by two auxiliary traffic policemen and had shouted abuse at them.

The policemen and Gan jostled each other before Gan became ill and yelled that he needed medicine that he kept in his truck, the report said.

Gan’s condition worsened after he took the medicine and he was pronounced dead after an ambulance arrived at the scene.

The official version of events was essentially in line with a report in this newspaper yesterday quoting a young woman who witnessed the incident.

The exact details remain unknown, and it’s unlikely that we’ll ever find out. At this point, hearsay piled upon hearsay is all we’ll get, and it’ll elucidate nothing. But indications are that some very vocal and very convincing rabblerousers were among the first to descend upon Wednesday’s unfortunate tragedy and turn it into something much more. Perhaps we could say something here about pent-up  anger at incompetent governance needing outlets. But perhaps it’d be equally worthwhile to say that some assholes decided to endanger public safety because they’re assholes. How you react to this incident, like so many in China in the absence of solid facts, probably ends up saying more about you than the situation itself.