Hu “The Gelded Fuckwit” Xijin took a moment this week to remind everyone that no one should pay any attention whatsoever to the Nobel Prize, unless it is won by a Chinese person that has yet to get in trouble.

Having hated the West, Westerners, the Nobel Prize and human thought for his entire “journalistic” career, Hu “The Pitiless Twat” Xijin was surprised by the Nobel Committee’s choice. 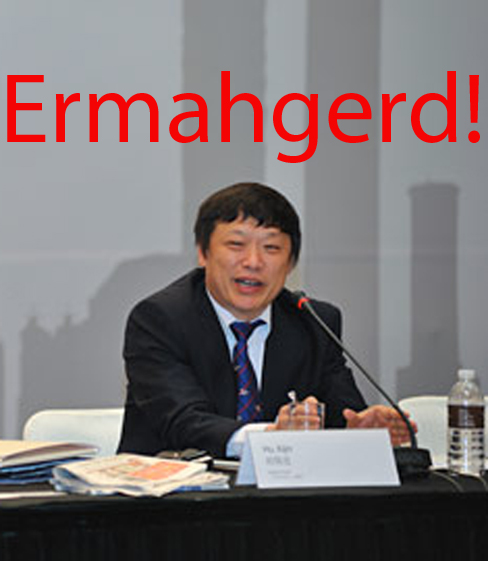 Hu “The Massive Douche-Covered Cunt” Xijin has a complicated relationship with the Nobel. For example, many may remember when he supported denying Norwegian Prime Minister Kjell Magne Bondevik a visa and the cancellation of ministerial level talks after the Nobel Committee awarded Liu Xiaobo the Nobel Peace Prize.

With this in mind, Hu “The Mop-headed Vagina Face” Xijin penned “Nobel Prize a win for mainstream values.”

Here are a few lovely little nuggets from Hu “The Unfortunately Un-shanked” Xijin:

Ordinarily, we should treat the Nobel Prize with indifference, as past prizes have tended to be politicized, just like the peace prize.

Note: Hu “The Painful Mole that Might be Cancer” Xijin suggests that all Chinese people are simply a pronoun in his mind, “we.” He actually thinks he speaks for a nation of people. He’s that nuts.

The editorial goes on to clarify Hu “Smegma” Xijin’s agenda vis-à-vis being a tit, as he denounces three Nobel Laureates: the Dalai Lama, Liu Xiaobo and Gao Xingjian, whose works are largely banned.

Chinese people generally believed that Gao was awarded this prize because of the political leanings in his literary works.

Despite Gao’s books being banned across the board, Hu “The War Criminal” Xijin (who I’m surprised can read) suggests that ALL Chinese people (undoubtedly the shrewdest of literary scholars) judged Gao’s work to be dreck, suitable only for the most unctuous Western political palate.

This reflects the greater attention the West is giving China. The Nobel Prize is closing the distance with China in its own way.

To round up, Hu “The Drug Resistant Tuberculosis” Xijin decided to warn the Nobel Committee of an impending takeover.

China has created many miracles in the past three decades, including lasting economic growth without incurring any wars. This should be recognized by the Nobel committee, which shouldn’t only focus on the fringes of Chinese society. It doesn’t add to the glory of Nobel Prize if it is at odds with China for long.

Also, another GT editorial, “Dissidents Alone in Ruining the Mo-ment,” is equally deplorable, droning on like a robot less intelligent than a toaster about what ALL Chinese people “think.”

By now, everyone has heard of Mo Yan, his Nobel and even some words uttered about Liu Xiaobo. Some are pissed because they don’t like the fact that an apolitical Chinese author won. Others are turning the spotlight on China’s repressive political system. The newspapers seem to think this means the West is coming around to China’s way of thinking about intellectuals and politics, largely because their editors are all mentally sub-normal.

Personally, I’m reminded of a Stephen Jay Gould quote: “I am, somehow, less interested in the weight and convolutions of Einstein’s brain than in the near certainty that people of equal talent have lived and died in cotton fields and sweatshops.

So, pour one out for all the great Chinese literary homies that didn’t make it through the past, can’t stand up in the present and are too scared of the future to bother.

Chicks and China both love bad boys, but whereas girls like motorcycles and fighting, Beijing’s newspapers get all wet and sticky for just about any dictator that considers a 30-foot portrait of themselves a “public works” project. Kim Jong Il, Bashar al-Assad, The Stay Puft Marshmallow Man, the list is endless.

First up on the authoritarian hotties list is the Despot with the Soft-spot, the Latin in the Satin Straightjacket, the one, the only: Hugo “Boss” Chavez! 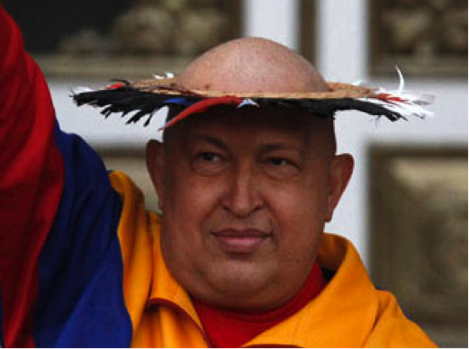 As despots go, he’s mild at best, but you just can’t buy his kind of crazy. From the US-made Haiti Earthquake Machine to saying NATO gave him cancer, Hugo is an unending source of harmless foolishness. Harmless, that is, unless you’re all, like, obsessed with human rights.

The Chinese press had a rare treat this week when one of their beloved psychotic allies was elected freely and “fairly” in elections, of a sort.

Nevertheless, in China Daily’s “Chavez expected to boost China links,” the courageous Chinese press fought hard and got the line “Radical reform or change is unlikely to happen during the next term of re-elected Venezuelan President Hugo Chavez.” Hooray! Critical analysis!

Followed quickly by, “but he will continue to implement policies that benefit the poor and become closer to China.”

The only mention of Chavez’s little “bat-shit nuts” problem was in the line, “On foreign policy, Chavez is a self-sufficient revolutionary, known for calling the former US President George W. Bush ‘the devil’.”

They omitted the fact that he is probably more famous for calling the Israelis “like Hitler.” Now, that’s diplomacy.

Still, he won, so here’s a drink to your populist psychosis — you lovable nut, you.

The Huawei of all Flesh

The Chinese propaganda rags have a habit of referring to things in China as “China.” This is the case with Huawei or ZTE. These two companies ran into a spot of bother with the House of Representatives Permanent Select Intelligence Committee, if you haven’t heard.

The Global Times issued a reasoned and nuanced retort to the main accusations made by the Committee.

Ha! Just kidding. They wrote this: “Why does US fear Chinese telecom giants?”

The US is gradually becoming reduced to an unreasonable country.

It is because the US government wants to protect the interests of US companies that it is being so unreasonable.

Yeah, to have figured that one out, you would have had to have done something crazy like, you know, read the report.

China cannot be as generous as it was before.

Yup, “generous.” That’s what everyone thinks of when they think of China’s business practices, not “hopelessly subservient to party whims” or “lacking in quality control.” Nope. It’s all about the generosity.

The thing is, this very editorial (and many like it) are rock hard evidence that China doesn’t play fair when it comes to international commerce. The view of the CCP is that if you even get near to screwing with anything Chinese, they will poop upon you from a great height. The horde of government-owned newspapers will descend en masse and create a diplomatic horror storm where there was none.

The report from the US House Intelligence Committee is right here. As a matter of fact, on the same site, I recommend the responses from Huawei and ZTE regarding the original concerns here and here.

The report and further investigations have been bitchy to say the least, and it is just sticking it to China. The overall gist of the tiff goes a little something like this:

US House Intelligence Committee: Hey! Are you going to roll over for the Communist Party if they ask?

Huawei and ZTE: We are great companies that bring development to China.

Intelligence Committee: No, really, seriously, are you going to fuck with us just because the CCP gets a bug up its ass?

Huawei and ZTE: Years ago, Shenzhen was just a small city, but today, it is more like Silicon Valley, a Silicon Valley that has been part of China since ancient times.

Huawei and ZTE, snickering: Okay, no, we promise we won’t spy just because the Communist Party tells us to.

Intelligence Committee: And you promise that we can take a look at your books?

Intelligence Committee: The important stuff? You know, so we can make sure that your companies aren’t involved in state secret keeping?

Huawei and ZTE: HA! No! It is a state secret! (They run out of the room laughing.)

The report is obviously trying to piss off China’s public sector, a feat half as difficult as simply succumbing to gravity. In reality, this whole debacle raises some very important questions. Can any large Chinese business ever really be private? What is the effect of this endless media bullying? Does not having an objective oversight body harm Chinese business interests abroad?

Oh well, I’m sure Huawei isn’t getting into our phones and computers to HAPPY MOTHERLAND IS GIVE YOU MANY GOODS AND DEVELOPMENT. HATE JAPAN. HAVE A GOOD NIGHTTIME!!!!!! J

7 Responses to “To Serve People: Hu: The Man Who Lets the Dogs Out”