How did you learn about sex? At school, from a teacher? Or at home, from parent? Maybe a relative, or a cousin, or sibling? Or perhaps you discovered it by accident, around the same time you discovered a titty magazine, glossed with the allure of eroticism: the power of posture, the penetrative glance, deep-plunging appeal. All of these possibilities are considered natural. Perhaps they come with embarrassment — what we’ll chalk up to growing pains, most plainly illustrated by the mother who walks in on her masturbating son — but even then, it’s normal, it’s nothing to cut your penis off over. (Ladies, please substitute the gender-equivalent expression of your choice.)

But you know what’s really not normal? The above segment, first aired on China Central Television (parts 2 and 3 are embedded after the jump, plus Sohu version for those in China), that explores via man-on-the-street interviews how parents approach the most basic of questions.

Questioner: “When you were small, did you never ask your parents where you came from?”

Questioner: “Well, how did your parents answer your question?”

Question: “Well, when your children ask you, how do you answer?”

Lady: <face of sobriety> “I don’t think he’s asked me that question.”

Lady No. 2: “They just said they sprung me from a stone.”

…Questioner: “Has (your son) asked you this question before?”

Questioner: “How do you answer?”

Lady: “I just tell him I found him on the side of the road!”

Question: “And what’s his reaction?”

Lady: “Doesn’t believe it. Kids these days aren’t like we were back then.”

Lady No. 3: “Flipped out from underneath the bed.”

Man: “My parents said I was from some hole, they found me in a hole.”

Lady No. 4: “Mom will say I was picked out of a garbage dump or fell from some table.”

Question: “When you heard this answer, what was your reaction, did you believe it?”

I’d translate the rest for you, but I think you get the picture. One girl thought she appeared one day from a flush of water, and it wasn’t until middle school that she felt that maybe she had been, in actuality, birthed. One woman flat-out says she never asked. Another woman — in a rare bit of honesty, or something approximating it — said she told her daughter that a seed was in her belly, and when it germinated, she came out.

You can see, perhaps, why more than 13 million abortions are performed in China each year, a number that’s on the rise. Just this September, China Daily reported that “only 12 percent of 1,000 Chinese women (aged 20 to 35) polled said they full understand contraception,” according to a survey conducted as part of World Contraception Day (September 26). And “in addition to the small percentage sure of their contraceptive knowledge, Chinese women overrate the efficiency of withdrawal, periodic abstinence and emergency contraceptive pills, the survey indicates.” Meanwhile, there are indications that porn is increasingly filling the gaps in teenagers’ sexual awareness, and as a result, it “has implanted a misperception of sex into students’ minds, giving rise to a growing level of sex crimes in China, experts said.”

Parents here don’t like talking about sex, because when they were small, their parents never talked about sex. Forget about nationalism and identity issues or infrastructure or international diplomacy; perhaps the surest sign that a country is maturing is how its society talks about sex and gender issues.

South China Morning Post tackled this topic in an article Sunday, with this CCTV video as its news hook:

While attitudes have loosened in recent years, human sexuality remains a touchy subject on the mainland. Sexual education, though required for teenage pupils, varies greatly in quality from school to school. Some teachers just tell pupils to read textbooks.

So it may come as a surprise that some experts are not only advocating increased sexual education, but starting it earlier, even for kindergarteners. Such early-stage sexual education has been advocated in other countries, including the United States, where Barack Obama was criticised for supporting it during his 2008 presidential campaign.

But, with sex still widely seen as a subject of shame and embarrassment, many parents have been wary of the idea. Critics worry that sexual education in kindergarten could encourage children to seek pornography or experiment with sex too early. Others question the need to receive sex education at any age.

I almost hesitate to excerpt this next paragraph, but here goes:

“I didn’t understand sex when I was a child,” one parent told CCTV. “In retrospect, it was a good thing. Why can’t my son just grow up with the same ignorance as I did?”

Yet there’s another way to close read this expression of cowardly conservatism. Why can’t my son just grow up with the same ignorance? Because that’s not how social evolution works. Future generations are all supposed to be bolder, more curious, and as a result, more knowledgeable. But what it really takes is a prod (no pun intended, for the love of God). That prod has yet to come:

In the meantime, kindergarten teachers say they are more confused than ever about what they should be teaching. Zhu Yanhong, the head of a kindergarten in Beijing, told CCTV that the debate had been going on for more than two decades with little progress.

“We still don’t have a textbook,” she said. “We don’t have professionals to teach us how to teach. We don’t know how and to what extent young children should learn about sex.”

Whether to teach sex ed is a question with high relevance to society at large. Do we want our children to grow up to be mature, confident adults? Or are we to buckle under our own insecurity and discomfort and cower with the mere hope that they’ll turn out okay?

I could be overreaching. The pop vox, as a journalistic vehicle, is never meant to be taken seriously, as if it could enlighten us to some specific truth.

Anchor, Part 2, 2:45 mark: “Of the nearly 200 people interviewed, 85 percent of respondents’ parents told them they were found.”

In conclusion, if you do just one thing with this video, do this: scroll to the 4:35 mark in Part 2, when the journalist asks, “When was the first time you first encountered sex ed?” 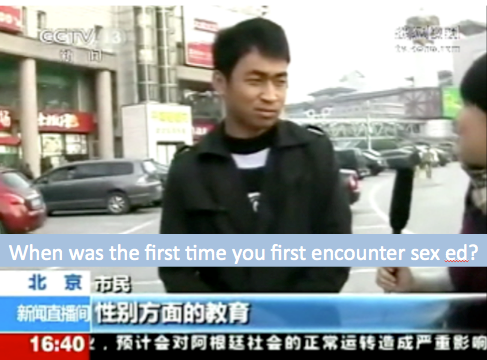 We made a GIF for you.

All three parts in one:

11 Responses to “CCTV Sends Reporter Out To Ask About Sex Ed, Discovers Horrible, Hilarious Truths About How Babies Are Made”