Let it be noted that kung-fu pays. (Disclaimer: it doesn’t always.) Shen Jianzhong, a 38-year-old man in Bazhou, Hebei province, fought off a mob of hoodlums who had been hired by a property developer to evict him and his family. We’re told that he more or less knocked out seven men, with help from his sidekick, his son.

The above video, which is a month old, recently went viral, showing the aftermath of a serious beatdown. Serious as in Adam West’s Batman vs. the Joker’s henchmen. Reports the Telegraph’s Malcolm Moore:

On October 29, as Mr Shen went to work and his wife popped out for a packet of instant noodles, a mob of “30 to 50 men” materialised at their front door.

“My wife tried to close the door, but they pushed it back and she tripped over. That is how the fight started,” said Mr Shen.

With a flurry of kicks and punches, he and his 18-year-old son, a fellow kung fu devotee, set about the attackers, rendering seven of them near unconscious in the hallway.

“It was self defence. I really cannot remember what kung fu skills I used.

It was quite messy. Only seven people were injured because the rest were scared and stayed outside. Some of them ran away,” he said.

Police, of course, said it was Shen who was in the wrong, since the other guys were unarmed. Shen and his son are currently in Beijing, where the son has been arrested by police.

“I think they are trying to fit up him up with some crime. I am concerned that my actions will end up hurting him,” he said, acknowledging that officials may try to emotionally blackmail him into signing over his lease.

As the Telegraph interviewed Mr Shen, however, his phone rang. It was, he said, a man named Zhou Jin, who claimed to be a member of the Central Military Commission, which oversees the People’s Liberation Army.

“He said he had seen my plight and was outraged. He said I should not give any interviews to the media and he would come and collect me in his car this afternoon,” said Mr Shen.

Shen joins an illustrious line of citizens who have fought back against pushy real estate developers. In May, an elder in Kunming fought off thugs with homemade Molotov cocktails. And who can ever forget Yang Youde, who built a cannon to blast his enemies.

Shen one-ups them all though by fighting with his bare hands. We wish him the best against his next wave of enemies. 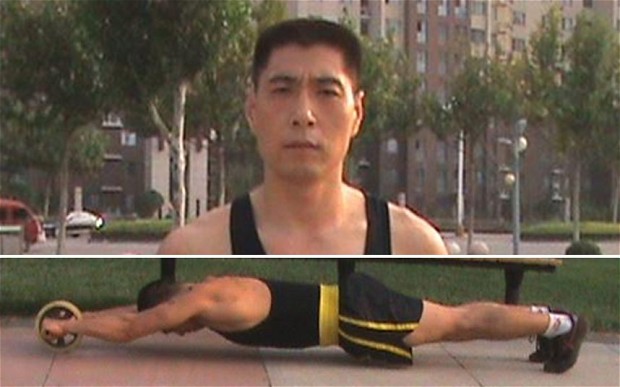