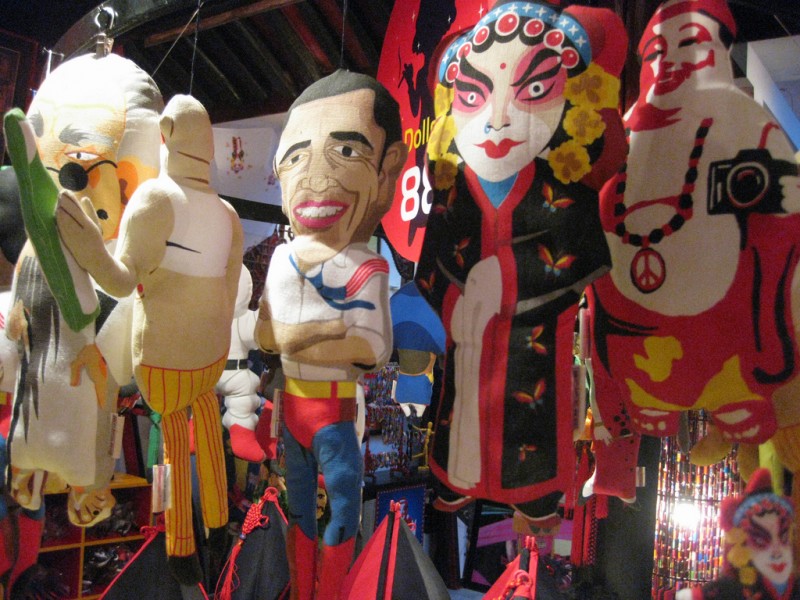 This might be our longest links edition yet, thanks to foreign media caring so deeply about China’s power transition. (You foreign media!) We’re not linking to any Global Times silliness — TAR Nation will be by on Monday to take care of that.

A story about how clueless the government can be sometimes. “The Communist Party has, for the sake of its own meeting, asked that my wife leave me and that I leave my elderly mother, who is too old to live without someone to care for her. Incidentally, she joined the Communist Party in 1947 (two years before the founding of the People’s Republic, and a time when joining was still dangerous) and did so in order to oppose the reigning Nationalist government, which she saw as ‘lacking humanity.’ // Now, I want to ask her, ‘What do you think of the humanity of the Communist Party today?’ but cannot bring myself to inflict on her the pain that the question would bring.” [Wang Lixong, NY Times]

Corollary: We live-tweeted it, these guys live-blogged it. [South China Morning Post]

The National Congress. “Mr. Hu told the ranks of party-picked delegates assembled in the Great Hall of the People that China faced a period of major change and ‘complicated domestic and international circumstances.’ Seated near him was his presumed successor, Xi Jinping, who is all but certain to take over as party chief after the congress ends next week and to take the reins as president in March. // Mr. Xi has privately signaled that he is aware of increasingly urgent calls from economists, intellectuals and some party insiders for a new round of market liberalization and even measured political relaxation to cure what they see as a deepening economic and social malaise. Mr. Hu acknowledged the problems facing the party, including corruption, but avoided specific mention of the scandals that have blighted his final year in power.” [NY Times]

Heh. “An explosive 15-minute speech at the 18thNational Party Congress by President Hu Jintao, laying out an explicit vision of reform in soaring rhetoric, had to be abruptly cancelled after Hu left it in his car. // Unable to find the lost notes, Hu was forced to substitute his potentially seismic remarks with a one-and-a-half-hour work report, sources say.” [China Daily Show]

The quote everyone is talking about. “During his speech at the opening session of the 18th National Party Congress of the Communist Party of China, Chinese President Hu Jintao said, ‘In over 30 years of continuous and consistent exploration since the Reform and Opening Up, we have been unswervingly holding high the great banner of socialism with Chinese characteristics. Neither will we follow the old path of closed door and ossified politics, nor will we take to the evil way of changing our flags and banners.’” [Ministry of Tofu]

In which southerner Jiang Zemin’s protege appear to have the upper hand over northern Hu Jintao’s. “Beijing is buzzing with political gossip about rivalries and factions. Little of the speculation is reliably informed. For more than 20 years, Chinese leaders have tried to institutionalise governance of the country, but when it comes to choosing their leaders, the most crucial decisions still come down to a small number of men whose influence is not always commensurate with their titles. The expected reduction in membership of the standing committee from nine to seven people is supposed to help the smaller group work better together as a ‘collective leadership’. But it could as easily have the opposite effect of alienating factions who will find other ways to exert influence—among them the heads of large state-owned enterprises, senior figures in the People’s Liberation Army and other retired leaders. Many of those elder statesmen appeared prominently on stage at the opening of the party congress on November 8th.” [The Economist]

China’s key players. “Here are the eight candidates for the remaining five spots on the PSC after Xi and Li take their anticipated seats, each handicapped by the odds.” [Tea Leaf Nation]

Good Samaritan foreigner saves epileptic, then disappears. “A man in his 30s collapsed on the road shortly after withdrawing money at 12:30pm. He lay in what the paper describes as a “crucifix shape”. As has happened many times before, a number of pedestrians walked past as if he wasn’t there. Later, a foreigner was seen crouching over the man and helping him. // A witness told the paper the foreigner spoke no Chinese but appeared to know what he was doing in resuscitating the man. A witness surnamed Li dialled 110 for emergency services. The foreigner left as soon as he saw the victim was out of danger, before police arrived.” [The Nanfang]

“China is a country of rule of law.” “In July 2011, a Hong Kong newsmagazine published the story of a Chinese vice mayor desperate enough to petition the Chinese central government for justice after his daughter said she was raped by a mining magnate in January 2009…. // Unsurprisingly, the story caused a sensation — but it did nothing to change the outcome. And so in September of last year, I received a call from a woman who introduced herself as ‘Long Meiyi, the daughter of the “petitioning mayor.”‘ In a sign of increasing helplessness, she had decided to reach out to a foreign journalist to publicize her case. Over a series of conversations across many months, the now 22-year-old Long told me the story of how the system stopped working to her advantage.” [Foreign Policy]

The lead should probably be written: “In China, the list of expatriates who gripe about facing everyday life is long.” “For expatriates living in China, the list of gripes that come with facing everyday life is long. Generally among those complaints sit Internet speed, pollution and food safety. But in recent weeks concern about the Internet has taken primacy as access to websites – especially foreign websites and virtual private networks, or VPNs, which allow users to circumvent Chinese Internet filters – has deteriorated. // …A spokesman for Witopia said the recent disruption is ‘one of the most severe’ the company had ever seen. // ‘We’ve been in this business for almost eight years and have had customers in China since the beginning. The Chinese government definitely reminds us now and again that they ultimately control their part of the Internet, and disruptions definitely increase surrounding political events,’ he added.” [Wall Street Journal]

Hey look, China has competitive elections as well. “The dates for the Chinese Communist Party 18th Party Congress have been announced, along with the small detail that members of the new Central Committee will be chosen through secret ballot in what Xinhua calls a competitive election; missing though is any information on just how competitive an election it will be.” [Morning Clicks, SCMP]

Actually, they simulate them only, really. “Every four years, the U.S. Embassy in Beijing hosts an election bash for Chinese and American visitors, giving them a chance to watch live returns come in on the big screen, and to cast ballots in a mock-election. It’s a reliably festive affair: Chinese men and women take snapshots of each other experiencing the rare sensation of dropping a ballot into a box, and the American ambassador waits gamely to find out if he needs to start looking for a job.” [Evan Osnos, The New Yorker]

What, you don’t have a cracked Xbox? “Sony Corp’s PlayStation 3 has received a certification of quality from a Chinese safety standards body, sparking speculation that China will end a decade-old ban on home game consoles. // China has banned video game consoles since 2000, citing a need to protect the well-being of its young people. Some analysts cautioned against reading too much into Sony’s new certificate, noting the organization that gave it has no regulatory authority.” [Reuters]

A funny story about Gmail, but only funny if you have a stable VPN and are able to log on. “@黑麦_, a fashion editor, shared this tip on Sina Weibo: ‘If your Gmail does not work, open the Xinhua News Agency’s website and browse news about the 18th Party Congress, and your Internet service will recover in about five minutes. Just another [expletive] tip to get on with your life. How [expletive] stupid.‘ // The post was retweted more than 14,000 times on Sina Weibo. Many social media users reported that they were indeed able to open Google and Gmail using this nifty trick — a few even said that they were able to briefly access Facebook. ‘Geez, it really does work. I found that [Gmail works] if you just keep Xinhua’s website open on the side,’ tweeted @在醉中寻找回忆 on Weibo.” [Tea Leaf Nation]

Drogba will be back. “Three coaches, boardroom upheaval and a reported players’ strike – Didier Drogba’s first season in China hasn’t exactly been smooth, but it looks like he’ll stick around next year.” [IOL Sport]

How China social network users followed Hu Jintao’s speech. “Whether or not the 64-page political report offers anything new is a question that may take days to answer. But it is interesting indeed to see Chinese discussing its language on social media platforms, searching for clues about the direction of domestic politics and making their own feelings and criticisms known (however ephemerally).” [China Media Project]

Just kidding about Global Times. Here’s one of the silly things it wrote recently. “Results of the US presidential election will be made public today. No matter who wins, Barack Obama or Mitt Romney, there’s no expectation either domestically or externally that US policies will dramatically change. The problems in the US will remain. // The election has just been about getting votes, and this is gradually becoming a popular political rule throughout the world. Politicians should try their best to please the voters and make various promises. The demands of voters will continue to increase, while their patience for setbacks grows weaker.” [Global Times]

Infographics! “China: snapshot of a decade.” [The Guardian]

Party Congress through the years (see below). [WSJ]

A story about the Bionic Wrench and China. [NY Times]

“According to national exit polls, Obama won 73 percent of the Asian-American vote.” [Politico] 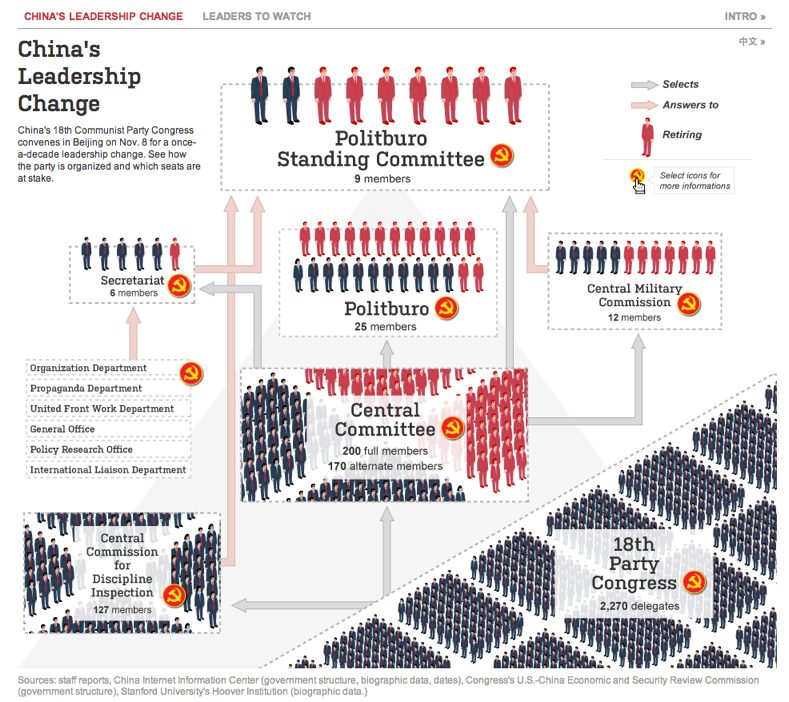