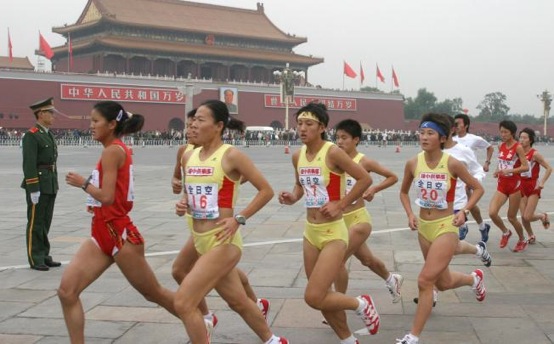 Lingering effects from September’s Diaoyu Islands row have caused organizers of the November 25 Beijing Marathon to take the unprecedented step of barring Japanese competitors. Not explicitly, of course — rather, “Japanese” isn’t listed in the nationality section of the online registration page. If you’re from Japan, you can run, technically, just not as a representative of your home country.

“If they choose other nationalities including China, Japanese can take part,” AFP quotes Japanese newspaper Asahi Shimbun quoting a source from the marathon’s organizing committee as saying.

The committee made the decision by taking into consideration the safety of athletes, the daily said in a report from Beijing.

If the decision was indeed made for safety reasons, we should almost applaud it. After all, why risk losing face over this race? Spectators might gather along the path, and might spew invective, and that might cause things to get out of hand.

Then again, I haven’t encountered anything — in the news or on the streets — that would suggest that there’s still a problem. I understand that nationalistic feelings will always simmer under the surface, and sovereignty disputes could surface anytime the Japanese or Chinese government decide it, but the irrational anger that swept across the country in September has largely dissipated, the crazies stuffed back into their woodwork.

So it’s all pretty silly, isn’t it? Could there be another reason?

Japanese companies such as Canon had sponsored the annual event until last year but they are not sponsoring it this year.

Who knows. But if, for some unholy reason, people are still stirred up about those damn Diaoyu rocks at the end of this month, we’ll know the problem runs a bit deeper than an annual race.

But officials have now updated their website to include “Japan” in the list of applicants’ nationalities, after the Japanese Embassy in Beijing lodged a protest, the leading Yomiuri Shimbun daily and Jiji Press said.

But Japan Running News tells us, with a screenshot, that Japan is listed out of alphabetical order, after Jordan. Face-palm. Again.

In interviews with Chinese media the event’s assistant race director said, “The Beijing Marathon has consistently welcomed entrants of all nationalities.  We have not blocked Japanese citizens from entering.”

Post-update note (a.m., Nov. 11): The online race entry system now includes Japan on the list of nationalities, but out of alphabetical order after Jordan.  See screen shot below.  Compared with the screen shots taken on Nov. 10 it is clear that the Beijing Marathon assistant race director’s comments do not reflect reality. 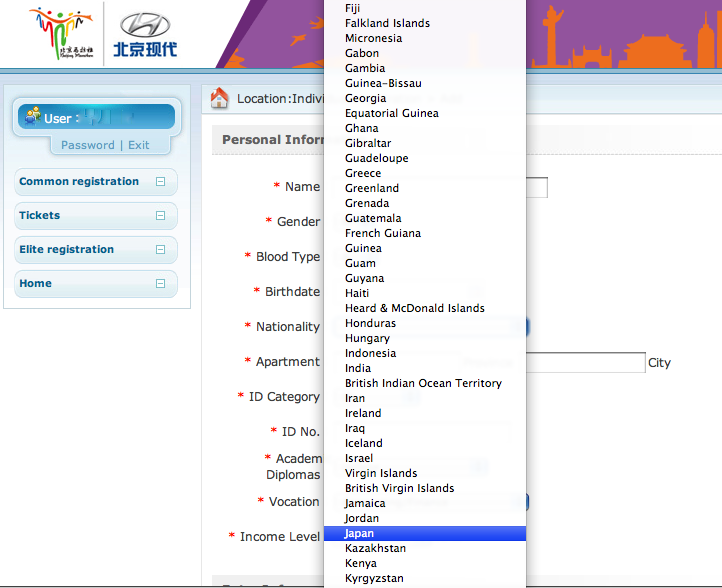 Japan Running News also says that “it seems as though this should be sufficient grounds for the Beijing Marathon’s loss of its IAAF Gold Label.”

Leave a Reply to grusl