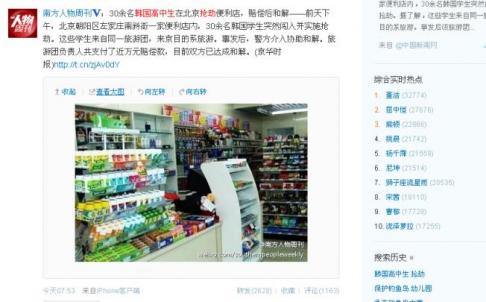 On Thursday, 30 student tourists from South Korea walked into a Good Neighbor convenience store in Beijing’s Chaoyang District and walked out with 1,700 yuan’s worth of snacks, cigarettes, and alcohol — without paying.

The cashier, Ms. Huang, told local media, “I was busy doing check-out, when I looked up, the shelves were empty, and goods were scattered and stepped on all over the floor.” She described the kids as tall males who were making a racket. “I was terribly scared at the time,” she said. “But now, after the fact, I’ve thought about it, and they’re all kids, so that’s that.”

But is that really that? After Ms. Huang called the cops, locals surrounded the students’ bus, not letting them leave. And then, as South China Morning Post explains:

The police arrived 15 minutes later and retrieved the stolen goods but did not press charges, according to local reports.

It was not clear what motivated the students to rob the store, but the police said it was probably just done on impulse.

The two sides reached a compensation agreement for 2,000 yuan. Perhaps Ms. Huang is a kind-hearted and sympathetic woman who was happy to have made 300 RMB and wanted to avoid an international incident?

People don’t seem to have reached that conclusion on Sina Weibo:

@露水安娜与红唇: You can compensate for looting? My horizons have been broadened…

@暴躁的小眼镜儿: In the past, the Celestial Kingdom’s laws didn’t apply for influential officials, now it seems they don’t apply to foreigners — forever applicable is farting!

@半角戒: A crime is a crime, we can’t tolerate it. If we go on long-term like this, letting people from wherever come to our country without fear of repercussions, this country won’t be much of a country.