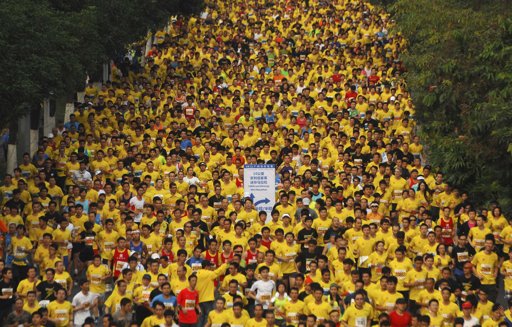 The cancellation of long-distance races at university games has highlighted the issue of declining physical fitness among college students.

The first Guangzhou Marathon was held yesterday morning, with local media estimating that about 20,000 people participated. (This number should be taken with a grain of salt; in September, organizers said “it is predicted that there will be 20,000 participants in the competition”; to the best of our knowledge, Japanese runners were allowed to compete). Ethiopians, per the norm, won: Bekana Daba Tolesa, on the men’s side, ran the 26-mile race in 2:11:05, and Mulu Seboka Seyfu, on the women’s side, finished in 2:26:46; both are world-class times.

What has overshadowed these performances, however, was the fainting of two competitors, one of whom is still in critical condition at the hospital. One runner was competing in one of the shorter events, a simple five-kilometer run, when he passed out, though he later regained consciousness and will be okay. Another man, about 30 years old, passed out in the main event and had to be rushed to the hospital. His condition is described as life-threatening, though no further updates are available at this time.

According to Beijing Morning Post in an article from 11:33 am, Guangzhou Public Health Bureau’s deputy bureau chief, Tang Xiaoping, said 1,517 participants reported dizziness or discomfort after the race, but the overwhelming majority were fine. The two who fainted received prompt medical attention, he said.

Scenes from the marathon: