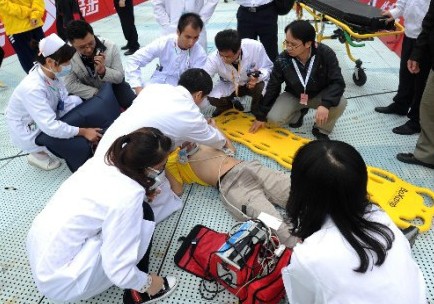 The Guangzhou Marathon on November 18 attracted more than 20,000 runners, the vast majority of whom ran without health complications. Two young men, however, died.

The first, Chen Jie, was a 19-year-old student at Guangdong AIB Polytechnic College from Maoming, Guangdong province (he was initially identified as 21 years old). Shortly after finishing his 10-kilometer race, he suffered cardiac arrest, and efforts to restart his heart resulted in fatal organ damage.

The second victim, 25-year-old Ding Xixiao, fell unconscious just before the finish line last Sunday in his 5-kilometer race and reportedly remained untreated for 20 minutes. This employee of a real estate company passed away earlier today, according to Xinhua via Nanfang Metropolis Daily.

A colleague of Ding’s, Chen Yangjie, said the runner lay on the ground untreated for 20 minutes, waiting for emergency personnel to respond.

“Ding fell down on the ground at about 8.06am, but the first ambulance only arrived at 8.27am,” Chen Yangjie told the Nanfang Daily. When an ambulance finally did arrived, it was not equipped with a respirator, he said.

Medical staff performed CPR, while they waited for a second ambulance equipped with defibrillators and respirators to arrive, Chen said. The runner was not admitted to hospital until 9.10am – an hour after his collapse.

This second tragedy has turned public attention, again, on race management and safety issues that were first brought to light last week.

Chen’s family reportedly demanded 1 million yuan in compensation after he died; Shenzhen Daily reports that organizers agreed to offer 300,000 yuan. It begs the question: why would they offer even that? Perhaps because the organization wasn’t up to snuff. Shenzhen Daily again:

A netizen called “aeleven” wrote on www.doyouhike.net that Guangzhou’s marathon wasn’t professionally held and lacked road directions and volunteers at Metro stations. Organizers provided water in 500-ml bottles along the route, the netizen said, rather than in paper cups that runners could easily discard during the race.

“It was impossible for runners to finish a bottle all at once or carry the bottle while running,” aeleven complained, adding the bottles also were a waste of plastic.

Netizens alleged that there were very little, or no, water or medical supplies offered in the second half of the marathon, and that there weren’t enough distance signs to help runners know their position or adjust their pace.

In the interest of fairness, it must be said that all runners were probably aware of the risks of long-distance running, and that heart attacks do happen, with or without marathons. But if what netziens say is true about the lack of water and signposts, we can at least conclude that Guangzhou did one heck of a shoddy job putting together such a large-scale event. No officially sanctioned event — this one recently received formal recognition from the International Association of Athletics Federations — should expose so many people to health risks.

Marathon organizers have issued a statement, but what’s glaring, as SCMP’s Li Jing points out, is what was not addressed:

Not only does that statement fail to answer the complaints about the medical response and lack of water, it also failed to promise that there would be review of the marathon’s practices before next year’s event.

Hong Kong’s Amateur Athletic Association, in contrast, responded to this year’s death of a male participant by bolstering efforts to educate runners about the health risks.

Meanwhile, the Beijing Marathon went off without a hitch this past Sunday. Note that the Beijing race is an IAAF “Gold Label” event. Perhaps there’s the difference.