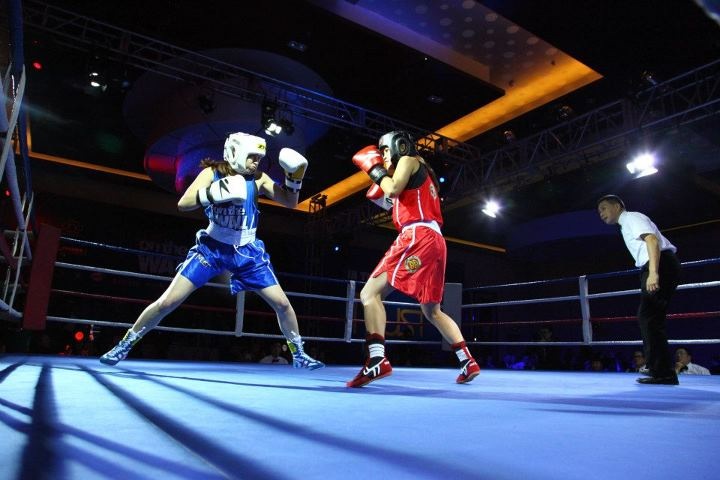 White Collar Boxing in Beijing on Saturday, “Brawl on the Wall” (pic by Svante, via YJ)

Monday was World Toilet Day and we did nothing with it. Here are your Thanksgiving eve links.

People’s Daily put out a poll asking netizens what they want. Netizens replied. “The winner? Democracy, in a landslide. Out of a healthy 187,000-plus votes cast, Democracy ranked first with over 61,000. This was followed by anti-corruption, which garnered over 38,000 votes, then “social livelihood” with more than 33,000. Although economic development has been the focus of much of China’s policy-making in recent years, that concern ranked a distant fourth.” [Tea Leaf Nation]

Political tea-leaf reading. “It is not surprising that many Chinese believe that their leaders are keener on enriching themselves than governing. This is a dangerous current building under apparent political apathy. It could be unleashed at any time. Already, earlier this year, the case of Bo Xilai, a previous contender for the Chinese Communist Party’s top office, was exposed for his involvement in corruption and a murder, causing a public uproar that sent censors scrambling. // In other words, a party that boasts its proletariat roots and pledges to ‘serve the people’ is quickly losing credibility among the masses, a crisis that, as Hu warned at the congress, could ’cause the collapse of the party and the fall of the state.’” [Helen Gao, Foreign Affairs]

We’ll talk more about @stariver soon. “China has launched an official crackdown on poor-quality humour, after a particularly lame joke about Mao Zedong visiting a bar with Henry Kissinger and Deng Xiaoping led to the jailing of a 17-year-old female student who ‘re-Tweeted’ it to friends.” [China Daily Show]

Uplifting story in British tabloids? Yup. “A father determined to find his missing daughter has reunited nine families with their lost children as he travels China hunting for his own. // Feng Jianlin’s daughter Feng Yun was kidnapped at the age of nine by human traffickers in 2008. // Three months after his daughter’s disappearance, Jianlin closed his tyre shop in Taiyuan, capital of Shanxi province, and decorated his small truck with pictures of the girl and his phone number. // He has since travelled thousands of miles around China in a bid to find her.” [Daily Mail]

Only linking to this here so you have the chance to go reread TAR Nation’s piece on the guy. “Jonathan Kos-Read frequently appears on TV and cinema screens across China. The enthusiastic photographer and doting father could be a script writer or a DJ, but he has chosen to be a full-time actor.” [Shanghai Daily]

This is what we mean when we call corruption endemic. “The head of a local urban management team in the southern city of Guangzhou has been detained on allegations of accepting multimillion-yuan bribes. At court on November 15, he said that he did not dare turn down the bribes for fear of offending some people. He also blamed the system for nourishing corruption.” [Southern Weekend via Ministry of Tofu]

Strange. “October 27, Qingdao university freshman girl Liu Xiao’ao along with 5 other schoolmates were asked out to ‘have dinner’ by 6 college teachers. Afterwards, she mysteriously fell off the building from a 4th floor restroom and died. This reporter got in contact with the Party committee secretary of the school involved, but when he heard that this reporter wanted an interview, he scolded this reporter: ‘Why the hell do you report this for? Don’t go looking for trouble!’ This reporter investigated and discovered that Liu Xiao’ao isn’t the only one who died from this school within the past year.” [NetEase via chinaSMACK]

Obama meets Wen Jiabao. “Wen and Obama met at the East Asia Summit in Cambodia, as tensions rise over maritime territorial disputes in the region which are nagging the always friction-prone relations between Washington and Beijing. // Both men stuck to familiar talking points in a short photo-op, and ignored questions shouted by reporters about South China Sea showdowns which have centre stage at the summit.” [AFP]

With all the usual caveats concerning these things. “One of China’s more influential experimental writers was beaten unconscious in Xishuangbanna yesterday, possibly by local mafia. Novelist Ma Yuan (马原) had only been living in the small town of Nannuoshan Guniangzhai (南糯山姑娘寨) for five days before running afoul of local thugs, People’s Net is reporting.” [Go Kunming]

Our sentiments exactly. “To be clear: to release a movie today that celebrates the moral right — nay, responsibility — of well-scrubbed American children to kill invaders is like giving a giant middle finger to the people around the world who see us as the invading army, and whose children have died by the thousands already. ‘Red Dawn’ is a ghoulish parody of reality, served up earnestly and obliviously, to an audience whose enjoyment will, perforce, be directly proportional to its ignorance.” [Salon]

Return of the Beijinger’s charity quiz, December 9 at the Hilton Sanyuanqiao. [the Beijinger]

Why is Jeremy Lin struggling? [Quora via Huffington Post]

Malcolm Moore of the Telegraph wins a UK Foreign Press Association award for news story of the year for his coverage of Wukan. This story.