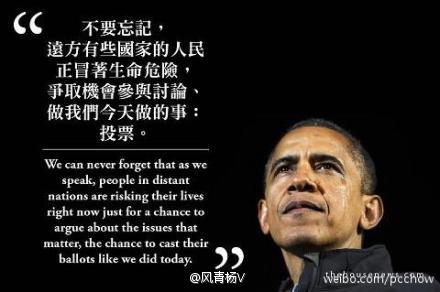 Whatever your feelings about American politics, it’s hard to argue that Barack Obama doesn’t shine on the big stage with the lone spotlight. The man knows how to deliver a message, and it’s liable to be heard as clearly halfway around the world as by those closest to him.

According to Tea Leaf Nation:

In his acceptance speech in the early morning of November 7, re-elected U.S. President Barack Obama seemed to be talking to the world when he said: “We can never forget that as we speak, people in distant nations are risking their lives right now just for a chance to argue about the issues that matter, the chance to cast their ballots like we did today.”

If the President was attempting to project his words to “distant nations,” he succeeded. People in China, at least, were listening. @风青杨V, a commentator and CEO of an Internet company from the Chinese city of Wuhan, posted an image linking to the quote in English and Chinese on Sina Weibo, China’s Twitter:

The picture is above. @风青杨V’s post lived a short and glorious life before getting the censor’s knife.

Of course, netizens being who they are, have figured out a workaround:

…One commenter echoed Kai-Fu Lee’s cryptic endorsement, writing, “I don’t know why, but I really like Obama. Hehe, this really is good material for English-language study.”

It should be noted that some Chinese people did cast ballots on election day — albeit mock ballots, at an event sponsored by the US embassy. Reports Wall Street Journal:

Of the 100 or so Chinese nationals present, many took turns in a mock voting booth. They walked behind a curtain, filled out a facsimiles of U.S. ballots – the one I saw was from California—and deposited them in voting box. The embassy staff offered helpful advice, such as folding the paper ballot so no one could see the voters’ choice.

Afterwards, the new Chinese voters invariably stopped, smiled and posed for photos in front of the voting area.

…But the voting booth was the hit of the morning. “America should be very happy,” said Li Yongping, a book editor from Hunan province. “It’s free to vote. That’s the best.”

Meanwhile, the 18th National Congress continues, and on Sina Weibo… a lot of politicians are blocked. Via Blocked on Weibo:

2 Responses to “Obama Is An Inspirer Of Nations, Particularly China, And Provides Good Material For English-Language Study”

Leave a Reply to SteveLaudig