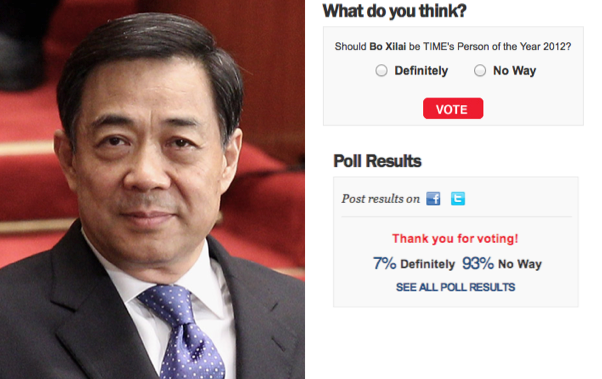 There’s no question Bo Xilai has had an eventful year, directly responsible for outrage, consternation, confusion, exhilaration, and joy (he was manna from heaven for China’s foreign correspondents). As Time’s Austin Ramzy writes, “Bo was favored to win a seat on China’s all-powerful Politburo Standing Committee this fall after having boosted his popularity by reviving Mao-era culture, expanding social safety nets and pushing an aggressive and sometimes brutal crackdown on organized crime. But his flashy initiatives angered rivals in China’s buttoned-down Communist Party.” Right, his wife was also convicted of murdering a British businessman, so that’s big. But big enough for Time’s Person of the Year?

So far, the vast majority of voters say no, probably because most Americans still don’t know him from Hu Jintao. (Just a guess.) Bo has a way to go.

Also, this guy is beating him: 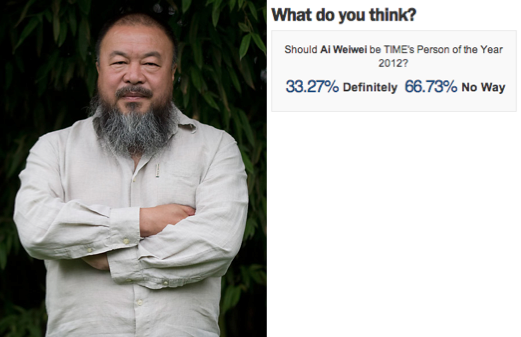 So, yeah, we don’t put much stock in this. But you have until the end of December 12 to vote, so go have yourself that fun. We’ll probably broach this topic again before then.

3 Responses to “Should Bo Xilai Be Time’s Person Of The Year? (More Than 90 Percent So Far Say No)”