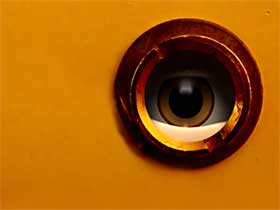 In this day and age, someone somewhere had the brilliant idea that it’d be perfectly fine to install peepholes in a student dormitory as a form of surveillance.

That somewhere is a middle school in Wenzhou, Zhejiang province. As Shanghai Daily tells us:

About 470 students live in the dormitory building of Longwan Experimental Junior High School and their rooms were recently fitted with peepholes, through which teachers can see what is going on inside, the Wenzhou Metropolis Daily reported.

Students can be difficult to deal with sometimes, and moody, and irrational, and lack perspective about the world. But in this case, I think they’re perfectly justified in voicing disapproval:

“I feel uneasy and unsafe knowing I am being watched,” a girl student said. Others said they used to do anything they like in the room and now they have to go to the bathroom to change clothes.

The official response seems to be, “Well, you shouldn’t play so much video games, if you don’t want us peeping at you.”

He Xiaozhen, a school official, said they installed the peepholes two weeks ago to prevent students playing video games and violating school rules. It is still on a trial stage.

Obviously. How could adults, after all, possibly betray the trust of minors?