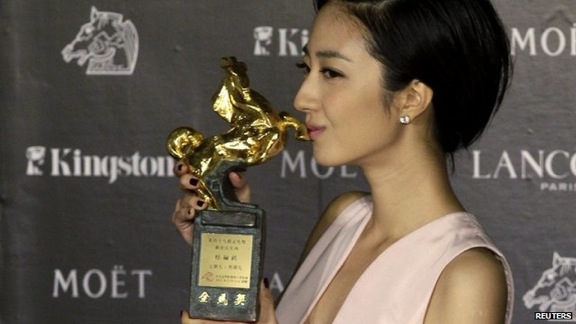 The Taipei Golden Horse Film Festival, inaugurated in 1962, is the oldest and arguably most prestigious of China’s four major film awards (the mainland’s Hundred Flowers Award was also founded in 1962, but it was suspended from 1964 to 1979, for obvious reasons). On Saturday, in its 49th annual show, director Gao Qunshu’s Beijing Blues won best feature film. Life Without Principle‘s Johnnie To won best director, and Lau Ching-wan won best actor. And the boxing film China Heavyweight won Best Documentary.

You’ll note that all those recipients are from the mainland or Hong Kong. Of the 23 awards, only four went to Taiwan, and one of those was “Outstanding Taiwanese Filmmaker of the Year,” to Huang Yu-Siang. (The other three were Audience Choice Award, to Gf*Bf; Best Leading Actress, to Gwei Lun-Mei of Gf*Bf; and Best new Director, to Chang Jung-Chi for Touch of the Light.)

As with all high-profile award shows judged by a jury, there will always be unhappy viewers who think so-and-so got robbed. In Taiwan, however, some of those unhappy campers are also lawmakers who are taking the concept of sour grapes to new extremes by calling for the entire festival to be scrapped:

Taiwan’s showing was so poor that some opposition lawmakers from the Democratic Progressive Party have called for the event to be scrapped.

She said the festival should be terminated to give way to a new awards system to spur the development of the local film industry.

Got that? Politicians want to purge the current awards in lieu of different awards. And you can’t just have both because…?

Indications are, at least according to Focus Taiwan, that this statement has backfired. Among the most vocal critics of the DPP’s stance are local film directors. Wei Te-sheng, director of the Academy Award-winning Warriors of the Rainbow: Seediq Bale, was paraphrased as saying, “What really counts is not whether you win or lose, it is whether you have completed a work you think should have been done.”

What do you think, was someone jobbed at this year’s awards? Got a favorite from the nominees? Let us know. In the meantime, we now have more DVDs to shop for.

One Response to “Taiwan Only Won Four Golden Horse Awards, So Some Local Lawmakers Now Want To Nix The Whole Film Festival”