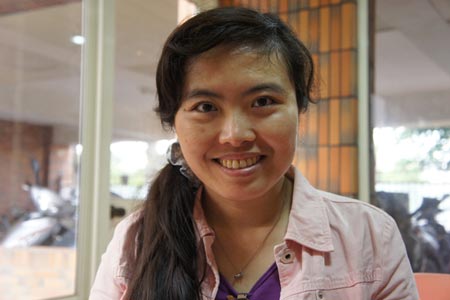 Last September, Liu Shu-jen got the notion, somehow, that David Petraeus, the four-star general who was then still the CIA director, was going to fly to Taiwan to marry her. She transferred, in total, $50,000 to Petraeus’s “offshore band accounts,” and then found herself in jail after trying to cash 37 fraudulent traveler’s checks. As Want China Times tells it:

Liu, even from prison, was determined. She said that her lover, in his US military plane, would bust her out of prison and suavely slip that ring on her finger, even if, in the internet “David’s” words, “it will start World War III.”

We don’t think Petraeus, who resigned on November 9 after admitting to an affair with Paula Broadwell, is losing much sleep over this one.

This time, she claimed on Nov. 9 that the CIA director had written a letter to her in early November before the US presidential elections, telling her in advance that he will resign after elections end. Petraeus’ resignation, therefore, did not surprise her at all, according to China Times, our Chinese-language sister newspaper.

Due to personal factors, Liu said that it was not convenient for her to make public the details of the letter. She added that she was unaware of who was having an affair with David and did not know if the scandal was the real reason for David’s resignation.

Having been the face of the US enforcement agency, Liu is afraid that his resignation will make him a target. “I am deeply in love with him, therefore I am worried about his safety,” she said.

“I always believe that David will come to Taiwan to visit me. In fact, the Taiwanese government can consider inviting David to Taiwan to promote the relationship between two countries,” said Liu.

“There’s almost zero percent chance that national security was compromised or at risk,” he said Monday.

We turn to WCT again:

Liu revealed on her Facebook account that a question about the immigrants in a round of presidential election debates on Oct. 18, alluded to the situation between herself and David. “Obama’s reply mentioned me and my situation without mentioning my name!” she claimed.