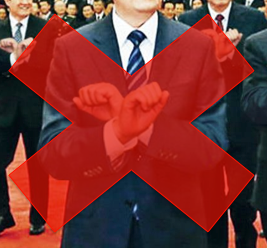 What I don’t understand for the life of me, however, is why THIS is censored. The photoshopped picture of China’s top leaders doing Gangnam Style — found on Facebook, posted to this website on November 13 (above link) — was shot down by the moderators of Sina Weibo. A user with more than 131,000 followers, Gangsong Samha (港怂萨沙), posted the pic to Sina Weibo on Saturday, 1:10 pm. It was removed at 2:56 pm. China Media Project explains:

The images of Chinese leaders are carefully managed by propaganda leaders, and the suggestion that they would dance in formation and shake their hips is certainly unwelcome.

But why is it “certainly unwelcome”? Are we making fun of Hu Jintao? Are we saying Wen Jiabao has a horse-face? Are we commenting on Xi Jinping’s inability to move his hips laterally? Help me out here. How is 1) this picture at all political, other than the politicians? and 2) this picture at all insulting?

The accompanying text to the Sina Weibo post, by the way, reads:

Ah, there we go. Maybe the censors deleted the post because it was stupid.

By the way, we still don’t know, definitively, the identify of this image’s creator. Please step forward if you’re the genius.

3 Responses to “That Picture Of Chinese Leaders Doing Gangnam Style Has Been Censored, Because Censors Hate Fun”