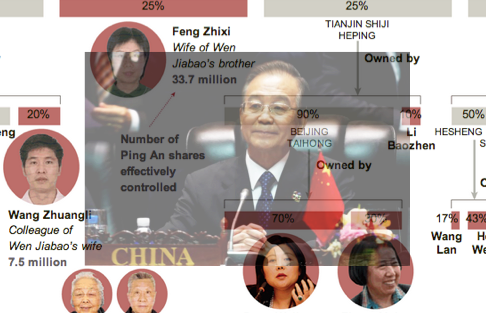 They’re already blocked, so fuck it, right? The New York Times has continued to delve into Wen Jiabao’s “hidden family fortunes,” following up on its original blockbuster that got the website blocked on the mainland. In “Lobbying, a Windfall and a Leader’s Family,” David Barbosa and co. report that Wen Jiabao was directly responsible for keeping the company from breaking up. In 1999,

“I humbly request that the vice premier lead and coordinate the matter from a higher level,” Ma Mingzhe, chairman of Ping An, implored in a letter to Mr. Wen that was reviewed by The New York Times.

Ping An was not broken up.

The rest, as they say, is history. Ping An became one of China’s largest financial companies, one which made Wen Jiabao’s family very, very rich. The NY Times offers this helpful infographic that shows the number of effective Ping An shares Wen’s family members owned (they did so through a series of other companies, notably the investment company Taihong). A more creative government would simply spin this as Wen being the most generous family man in the history of mankind. In a society more forgiving of these type of things, Wen could go before cameras and deliver a speech about how he isn’t ashamed to have used his connections in a interrelationship-based society to help his sister-in-law make a few million on the side, and his dear friend, the mother-in-law of his son, who was down on her luck and just needed a few million to get back on her feet. He could say that he’ll give all the money back but not the Tibetan mastiff, and perhaps we’ll all cheer his political acumen and call his speech Checkers 2.0.

The article isn’t as damning as the earlier one, which implied — in so many words, intended or not — that Wen was a hypocrite. This article makes no claims of broken laws or a smoking gun, and it’s coated in such financial-speak as to uninteresting to the layman — yet it has the establishment equally skittish, judging by their response:

In Beijing, China’s foreign ministry did not return calls seeking comment for this article. [...]

Neither Mr. Wen, who is expected to retire in March, nor Mr. Dai, who is now the head of the National Social Security Fund, could be reached for comment. [...]

After reviewing questions from The Times, the Securities and Futures Commission of Hong Kong and the Hong Kong Stock Exchange declined to comment. The China Securities Regulatory Commission in Beijing did not respond to inquiries.