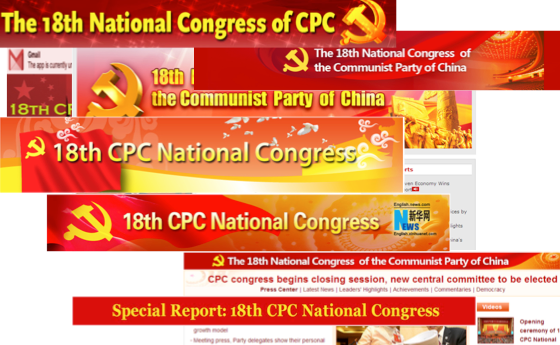 The Party Congress is, mercifully, over. For those of us here in Beijing, it feels good, like a massive cold-water colon cleanse. Now with the brown-nosers out of the city, we can reflect.

Now that it’s over, I mourn the loss of the banners.

The propaganda rags had a few different roles to play during the Congress. 1) Don’t report bad news. 2) Make sure everyone loves the Congress. 3) Love our dear leaders. 4) Publish editorial rimjobs about the Party Congress. 5) Convince people that change will happen gradually, after they die. 6) Hate the US and their pussy-ass elections. 7) Bang on about the Party Congress, no matter how boring and un-news-like, until you kill yourself, go on, do it, just kill yourself. Do it. You pansy. Go on. You don’t have the balls, do you? Do it. DO IT!

In this mess, every newspaper, under severe stress to prove that they love the Communist Party more than the other guy, fitted their websites with giant banners to make sure that there is no doubt: The Party has them by the short and curlies.

Every organization tried to have the biggest, reddest, communist-est banner ever. Web designers from People’s Daily to China Daily woke up from their painful slumber ‘neath the Midgard serpent and designed page banners that would get them appointed to the head of the Red Guard.

Award for the Reddest goes to:

People’s Daily went a bit off the rails on the whole “red” thing. They even turned their text red on the home page of their website (as did CCTV).

I swear I didn’t Photoshop that. It actually, actually has a headline that says: “Delegate in Wheelchair.” At least it’s not “Delegate who just wouldn’t listen.”

The first thing people learn about People’s Daily is that it’s, much like Playboy, not read for the articles. It’s the editorials. They are viewed as the express opinions of the government itself. If the government likes garlic on Tuesday, China likes garlic, and if you don’t, you’re a turncoat vampire Japanese traitor.

This is to be expected. Of all the newspapers with a government hand up their fundament, People’s Daily has fingers out its eyeballs. The Ministry of Finance has the main stake, and People’s Daily Online will be paying taxes for the first time in 2013.

Of course, the content is full of scathing indictments of the current press-hating institution, like, “China’s path to democracy,” “Scientific Outlook on Development becomes CPC’s theoretical guidance,” “People’s Daily calls for winning new socialist victory at party” (from Xinhua) and “CPC develops democracy over last decade,” which, I’m sure, is a surprise to all of us. It’s not real democracy. It uses the term “Democracy with Chinese characteristics” without a hint of shame.

Next up, the award for the Biggest Banner goes to… 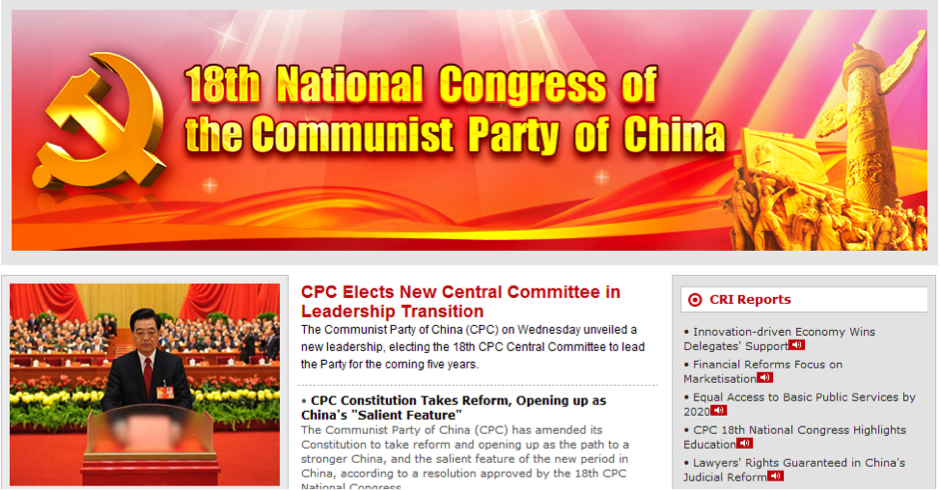 Yeah, it’s that big. Golden workers and shafts of light bearing aloft the flying penis. CRI usually stays away from politics, in that they don’t discuss anything of substance. They discuss what netizens are talking about until they’re blue in the face. They abide by the Propaganda Department to the letter and intercut it with stories of traditional horse plucking in Zhejiang Province and other drek. Their stories involve a lot of “nowadays” and “in modern times,” like they’re explaining things to cavemen.

They also have things like… well… this: incidents where I don’t know what to make fun of first.

Next up, Most Effeminate Banner Featuring the Hammer and Sickle:

Found on Shanghai Daily. Wisps of clouds and doves flying over Tiananmen. That’s what I think of when I think of the Hammer and Sickle. I definitely don’t think of how mechanization rather than a hammer-and-sickle commune during the Great Famine could have prevented the deaths of 43,000,000 people. Nope, for me, it’s all about the aviary. (Note, figure of 43 million deaths taken from Judith Bannister’s figures, which are based on info from China’s State Statistical Bureau as well as China’s State Family Planning Commission. Don’t be a dick about it.)

Hopefully, the fact that pigeons were banned for the coronation was not lost on all.

Shanghai Daily does good work now and again and keeps the crazy to a minimum. But, this column is about making fun of the Chinese media, so here goes: They’re… racist pedophiles…  probably.

Now we’re onto: Blandest Banner. The winner is…

That’s plastered on their homepage, but if you’re curious about suicide and click on their “Special Report” (note: it’s NOT special), you get this banner:

Why is the bland banner on the home page and the flamboyant banner on a link no one will touch? Only Xinhua knows.

Next: Banner with Most Sparkling Disney Magic:

Readers may be surprised to learn that the ultra-nationalistic disgrace Global Times did not have a banner on their home page, mainly because it’s big and red all year round. But this more than makes up for it.

Their coverage consists mainly of how legitimately legitimate and normal the legitimacy is of the legitimate Chinese Communist Legitimate Party. Usually, I would end with observations about the Global Times editorials, but, concerning the Party, they are so full of flattery, bullshit and hating the West, I can’t wade through it. Do it yourself, here.

As much as I really, really hate the Global Times and their evil psycho-king Hu Xijin, there are a lot of people working there. Some of them are good. In fact, the greatest reporter I’ve ever met worked there, before he was fired. So, keep a light on in the window for people there who get pictures like this into the “special coverage.” 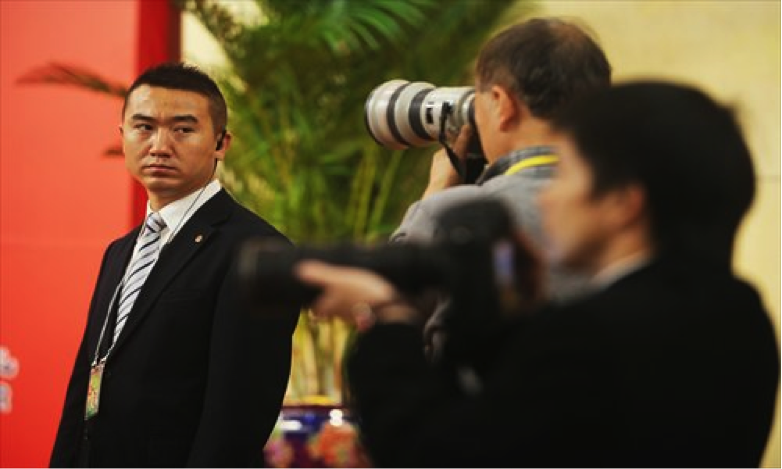 The party congress is over, and thank Christ for that. Anyone who wanted democracy or freedom of the press has stopped jabbering on about it because, for that to happen, they would probably need to have another one of those fucking meetings. So, screw it.

As a final remembrance, I have come up with a banner for the Beijing Cream, featuring how dissidents were sent on vacation, security buckled down, Internet shut down, pigeons and ping pong balls banned and the crushing, crushing boredom of it all.

2 Responses to “Under The Banner Of The Celestial Kingdom”