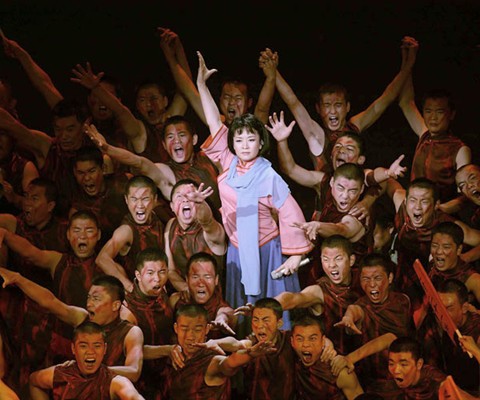 As many people have already discussed, Xi Jinping’s famous hot wife is presenting some issues for the PR folks at the CPC. You’d think having a singer babe on your team who devotes her spare time to anti-smoking campaigns and helping earthquake victims would be a windfall for the party’s propagandists.

Apparently not. Peng Liyuan’s name is blocked on Sina Weibo, and while 10-page spreads on the Obamas or Kate Middleton sell like hotcakes in China, you’ll be hard-pressed to find gossip mags discussing this country’s first lady. I get their fears, but in light of all the recent scandals and Hu Jintao’s vortex of charisma, they could kinda use an image makeover.

Yesterday I started asking myself if the government couldn’t use Peng to make the party hip with the kids. I mean, there are people who watch CCTV’s campy Spring Festival Gala when they’re not being forced to by their families… right? Right?

A quick poll of Chinese friends and their friends proved me wrong. Most comments were along the lines of, “What? Why would I like her?” and “Ew, I absolutely hate that kind of music.”

Hmm. My sister in Canada helpfully offered, “She looks like someone who could not possibly be popular with the kids, except the kids who are equivalent to the ones interested in reading that Conservative Teen mag.”

Fine, maybe I’m out of touch. But frankly, I would be sad to lose the public side of this woman. She’s kind of amazing. Not just because of the AIDS activism, or that her legs look phenomenal in a military skirt.

1. She is the Chinese Cher…

…if Cher were less of a hippie and more into songs about how the army is your friend. But seriously you guys. The white hair. The 70s flared pantsuit. The costume changes? I’m not going to put you through the whole hour and 20 minutes of this one-woman musical, but skip to about 5 minutes and you’ll see what I’m talking about.

2. She is the Chinese Marilyn Monroe

Just look at this group of barely post-pubescent soldiers aching for some Mrs. Robinson action. One of them claims he walked for five and a half hours to get there. (Trust me, dude, that line is not going to work. Desperation is such a turn-off.) Look how she makes each of these boys feel loved and important after their hard, eating-the-bitterness walk. Look at her calves in those heels! If I were her husband, I might want to get her out of the spotlight too.

This video is kind of amazing, obviously. The original definitely does not stand up to the Peng Liyuan version, where we get to see Tibet as it should be: in glorious neon.

And it’s called Laundry Song. Look, I hate doing laundry. Specifically, hanging it. (Confession: sometimes I totally leave my wet clothes in the machine all day just to put off this task.) And here Peng is, promising me not just clean clothing, but improved infrastructure at the same time. It’s no wonder this Tibetan-impersonating dance troupe looks so thrilled. I’d fall into shoulder-waggling step behind her any day of the week.

4. She knows how to smile

Have you seen pictures of CPC leaders? You have? Then I rest my case.

Allie Jaynes is a freelance journalist living in Beijing. She tweets at @AllieJaynes.