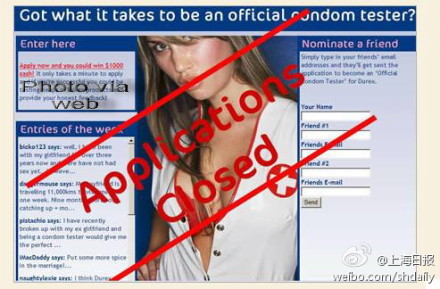 Screenshot of original ad after the jump; the above pic is via Weibo, @shdaily.

Wanted: Condom Tester. Must Be Female, Good-Looking, Between The Ages Of 18 and 25.

The ad has been removed, but for a while, “lively and good-looking women” between 18 and 25 were given the chance to apply to test condoms. Requirements are exactly what you think. Via Shanghai Daily:

The company offered each woman a salary up to 3,000 yuan (US$480) per day, according to Shanghai Youth Daily. Within three hours after the post was uploaded on Baixing.com on Sunday, 22 people had applied for the job, the newspaper said.

A reporter with the newspaper called the number provided in the ad and spoke to a man surnamed Chen, who said he worked at the company in Shanghai. He added that the company had been hiring women to test condoms for several months.

To no one’s surprise, suspicions have been raised that the company was using the ad to solicit prostitutes. But could they really have been doing this for several months without anyone noticing?

Right. You’d want the 50-kuai variety in the pink barbershop, as everyone knows.

“Although machines are usually used to test condoms, we have to hire women and men because we can’t afford the machines,” Chen was quoted as saying.

This is the money quote though:

“In the tests, women usually don’t have such a tough job as only men are responsible for taking notes and getting test results,” Chen added.

We men have been saying this for, like, millennia: such a hard job, ours is. You women think it’s all easy and such, like uttering “That’s what she said.” Oh no. It’s fucking hard, man. So hard.

Here’s the screenshot of the original ad: