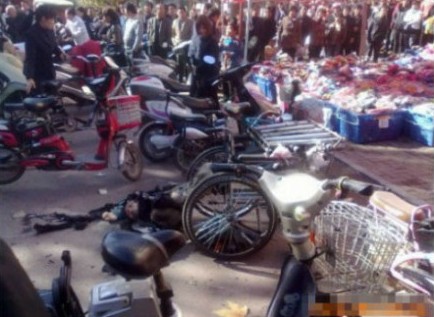 Here’s something you only see in awesome TV shows. On Sunday, a man in a wheelchair in Tanghe County, Henan province blew himself up in front of a large shoe store, injuring nine people around him (no life-threatening injuries). Authorities are still investigating. The official write-up that was released to several news outlets is asking people to not listen to any rumors.

Rumors such as these, perhaps, that totally obfuscate everything. According to Free More News:

Local government said it was an accident and denied any possibilities of terrorism.

It was also reported as a suicide bombing since the suspect was killed and pedestrians were wounded on a busy street. Witness said there was no blood at the scene, and it may not be an explosion. The police quickly blocked the scene and the details remained unclear.

One Response to “Wheelchair Bomb In Henan Kills 1, Injures 9 Others”