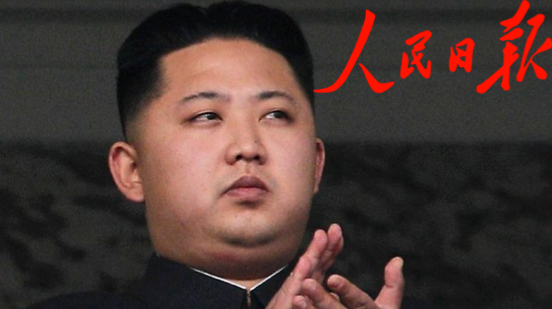 But they’re still good for a laugh. Chief among these good laughs is their strange and slavish devotion to making North Korea, the worst place on earth, not seem like the worst place on earth. You think editors didn’t fall out of seats scrambling to publish, as quickly as possible, The Onion’s announcement of Kim Jong-un as Sexiest Man Alive? Then you don’t know People’s Daily.

The jury is out on why People’s Daily does this. North Korea is a diplomatic pariah. Wanting to look good in the eyes of North Korea does no good, as hungry people and heavy-handed propaganda seem to be in fresh supply. Perhaps it’s the similarity in systems. With the 18th Party Congress over, the papers have been bragging about the Chinese barrel-of-a-gun theory of governance as the greatest thing in politics since kissing babies. North Korea has their back on that front.

Whatever the reason, China’s mysterious neighbor is treated with a bizarre reverence in the People’s Daily’s editorial parliament. Obviously, all of these pictures come from North Korea’s News Agency, but why, upon why, does People’s Daily publish them?

The above are all thumbnails found directly underneath the editorial: “U.S. must remain neutral in South and East China seas: Clinton.”

These are all photos of Kim Jong-un… being. The dictator strides across the land visiting the nation’s top accomplishments like: 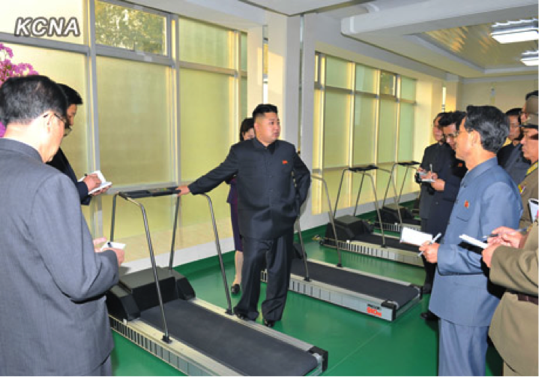 This… gym. Depressing gym. And, he also goes to this… 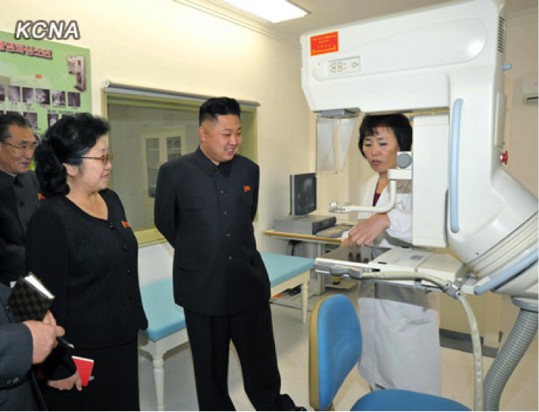 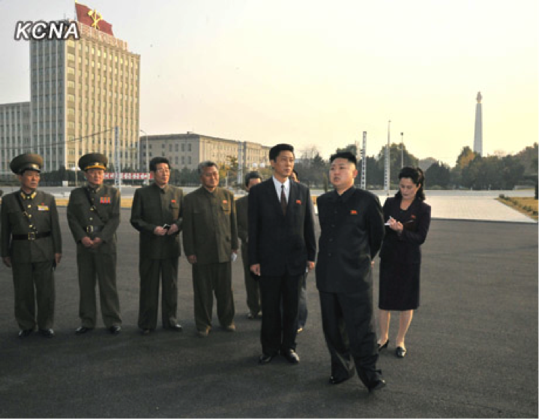 Actually, Kim Jong-un does this little tap dance thing in just about all the pictures. See his foot? 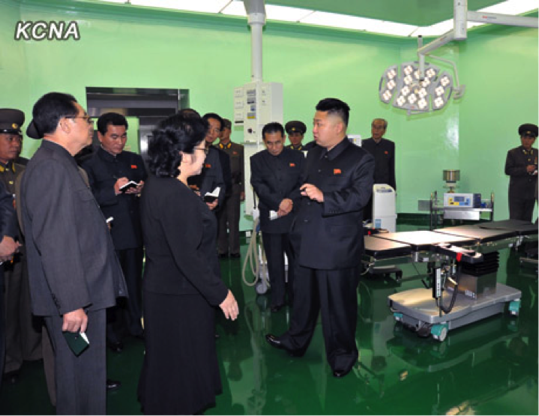 What is that? Is it cramping from stepping on necks?

Here he is, looking at his lunch: 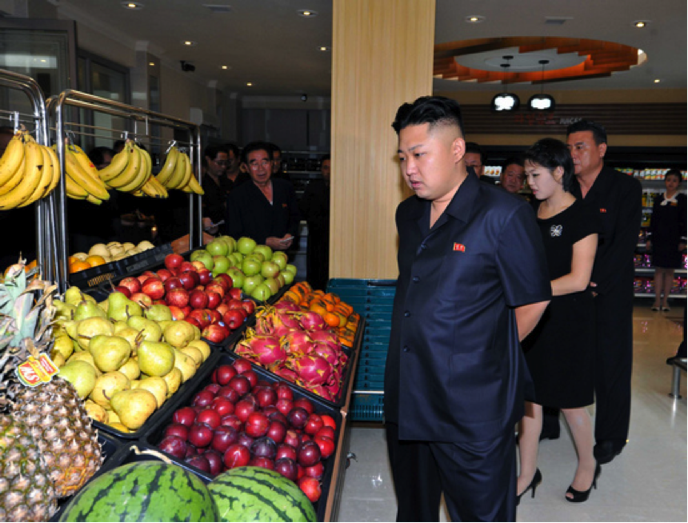 Notice the surprised, amazed and gob-smacked look on everyone else’s face. In truth, this is some sort of “restaurant” and Kim Jong-un commented, “The supermarket looks unique and delicate and its display is peculiar. It was built in such a way as to be a model impeccable in any aspect.” Judging from the pictures, it is unclear as to whether it’s a restaurant or supermarket. It appears to have aspects of both. But, to be honest, you can’t expect many North Koreans will tell the difference.

Making fun of starving people is a bit wrong, but our next section will show the North Korean people having the most fun of their entire “lives,” in “Masses of North Koreans Praising their Great Leader.”

Here they are in the most perfect human rectangle of all time: 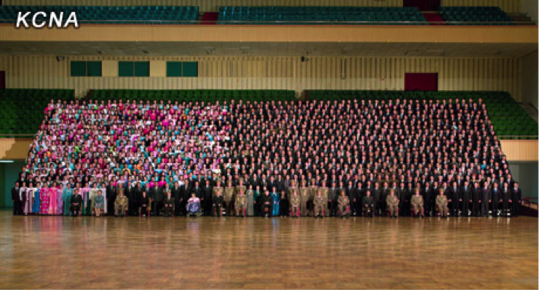 This is in a national newspaper, by the way. A NATIONAL NEWSPAPER. These people are standing around to “celebrate” statues of Kim Jong-il and Kim Il-sung at Kim Il-sung Military University. What a gas.

This is scary in an old-school way: 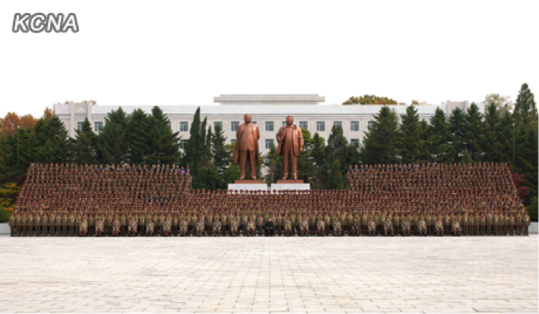 This is scary in a sci-fi way: 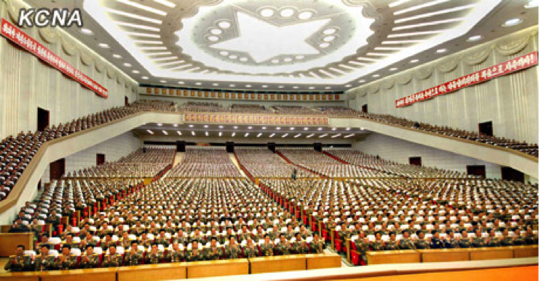 This is scary in a Def Leppard way. 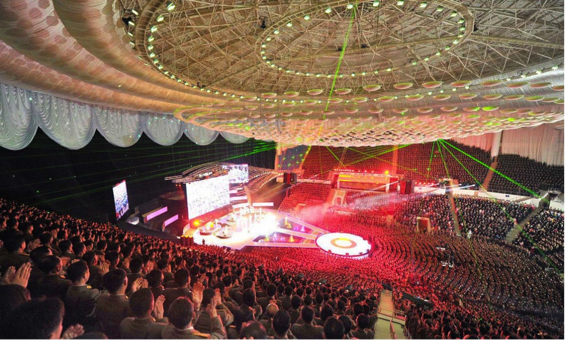 Next are North Koreans praising their great leader at a football game, and I’m guessing it’ll disturb you a little. 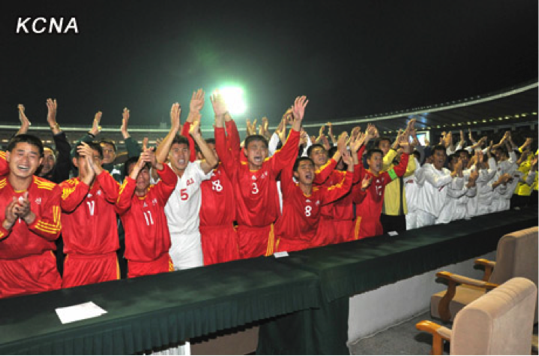 So, for those of you wondering how North Korea can exist largely un-harassed between Russia, China and a large part of the US armed forces, the above picture is why: You do not mess with that brand of crazy eyes.

A keen eye can notice strange things in some of these pictures, like Kim’s crazy leg. Here is one where they have clearly gone tallest to shortest on either side, with Kim Jong-un in the middle. This is, presumably, so he doesn’t look like such a short-arse. 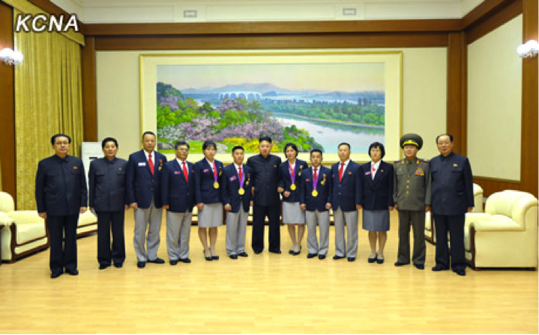 Also, notice the guy standing next to Chaiman Mao with some sort of tank-commander-cum-sombrero.

Little to no thought is put into what People’s Daily publishes in regard to these photos. Take the following caption for example: “…recently the country (North Korea) repeatedly appears with a new image as modern infrastructures are built one after another and people lead a better life. Let’s figure out a real DPRK through the lens. Believe it or not, there is something more than you know about the country.”

Oh, simple propaganda. What is it you expect to see? A skyscraper? A subway system? Well… 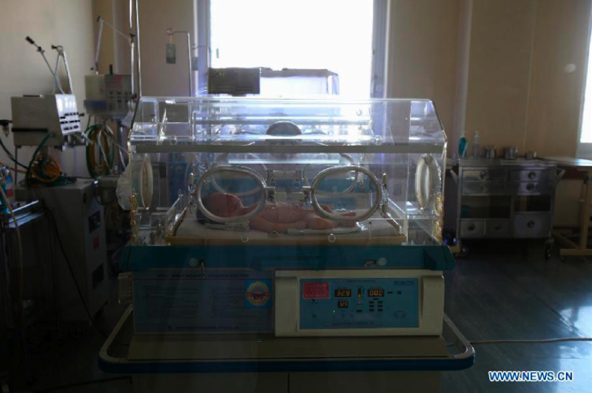 One Response to “You Think The Onion Is Wacky? People’s Daily Really, Truly Loves Kim Jong-Un”