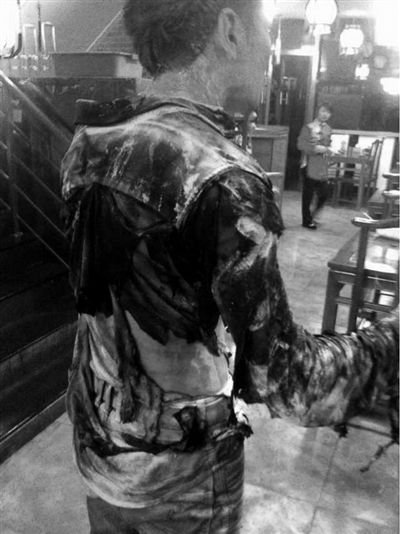 Firefighters have cautioned over the use of alcohol-fueled hot pot stoves, after a customer was seriously burnt in a fire caused when a waiter allegedly improperly topped up the fuel.

A diner, surnamed Wang, was injured Friday when flames erupted from an individual hot pot, according to a Sina microblog post from his fellow diner, Wang Xiaolong.

Wang Xiaolong posted that his friend was in danger of losing his right ear after going up in flames at Deyunzhai, a hot pot restaurant in Zhubang 2000 Mansion, on the East Fourth Ring Road.

Another fellow diner, surnamed Liao, told the Legal Mirror that as soon as the waiter lifted Wang’s small pot and refilled it with liquid alcohol, his clothes caught fire. Restaurant staff attempted to use water to extinguish the flames, and when this was ineffective, they used a fire extinguisher.

Of course, the restaurant denied responsibility, but it reportedly paid 50,000 yuan in compensation, mostly for Wang’s surgery. The restaurant has also suspended services.

What does any of this have to do with you, you ask?

On Sunday, Dingding hot pot restaurant on Guanghua Lu, Chaoyang district, which serves hot pots using an alcohol stove, said their staff had received no specific training on how to deal with the fuel.

“We use iron tongs to take the container out and refill it by following how the experienced waiters do it,” said a waitress surnamed Jiang at Dingding.

So as we enter the heart of hotpot season, i.e. winter, just keep in mind one of mom’s first rules: don’t play with fire. Or when you do, at least remember that alcohol, unlike water, is flammable. Be careful.

One Response to “You’ve Been Warned: Hotpot Can Cause You To Catch On Fire”