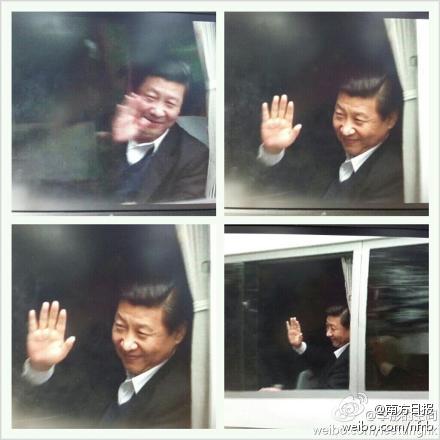 Look who’s making friends from both sides of the aisle. Explains Tea Leaf Nation’s David Weritime in the Atlantic:

Xi Jinping, China’s new leader, has recently embarked on a low-key barnstorming of China’s entrepreneurial south. The mere fact of Xi’s visit is exciting to Chinese liberals, echoing as it does the “Southern Tour” of reformist leader Deng Xiaoping in 1992, an early prelude to China’s market liberalization.

But Xi is winning points for style as well as substance. Although China’s mainstream media has remained largely silent about the tour, online chatter has focused on the demeanor of China’s new president. According to Hong Kong University’s Weiboscope, the most-shared image among prominent users of Sina Weibo, China’s Twitter, is currently the below photo collage taken by user Lu Yaming. [Ed's note: above.] In his Weibo post, Lu said he was politely asked not to cross a Shenzhen city street as a number of busses and police cars passed by. The road was not closed to traffic, and no sirens sounded. Xi was clearly visible, waving to onlookers. In another photo taken by an Internet reporter for portal takungpao.cn, Xi can be seen smiling and holding a baby aloft.

Holy crap, he is holding a baby aloft: 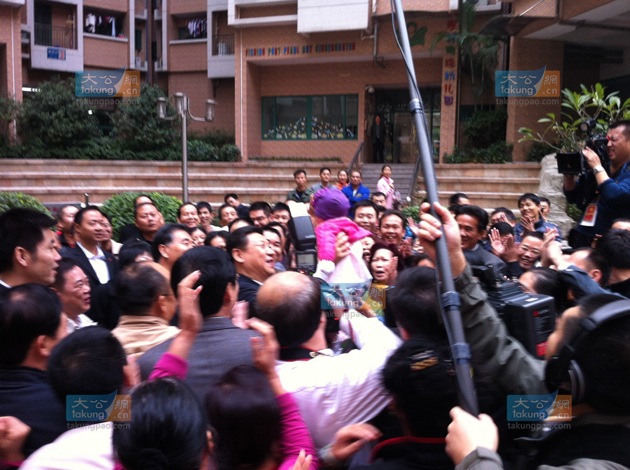 Serious question to frivolous issue: is Xi Jinping the first Chinese leader to hold a baby aloft? It’s an exceptional image, in my eyes. Also, since you’re already looking, check out the face on the woman directly next to the toddler. Either she’s beginning to cheer or about to have a panic attack.

(There are more fantastic pictures via the above-linked takungpao.cn slideshow.)

Of course, it remains to be seen whether Xi and company can maintain their run of good publicity when the honeymoon phase ends (good pub from non-Chinese media, I mean). Consistency seems to be the key word floating around: will actions remain consistent with words? Will behavior square with image? Because ultimately, anyone can stage a photo-op. Not anyone can govern this nation of 1.3 billion, and it’s Xi’s success at doing so that will reveal how exceptional he really is.