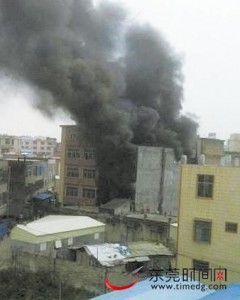 A man named Liu Shuangyun was arrested yesterday for starting a fire at an underwear factory in Shantou, Guangdong province that left 14 dead and one injured, according to Xinhua. The blaze lasted about half an hour, from 3:30 to 4 pm yesterday.

AP reports that Liu, a 26-year-old migrant worker from Hunan province, was upset over 3,000 yuan ($461) in unpaid wages, which might not seem like a lot until you realize that it was probably two or three months’ salary.

Not to excuse him for his crime, though:

Asked whether he had thought about or regretted the loss of life the fire had caused, Liu said, “I didn’t think about these things.”

…”The whole time, I’ve been very impulsive, very angry about this,” Liu said during the television interview. “So I did these things.”

All the victims were reportedly women between 18 and 20 years old.