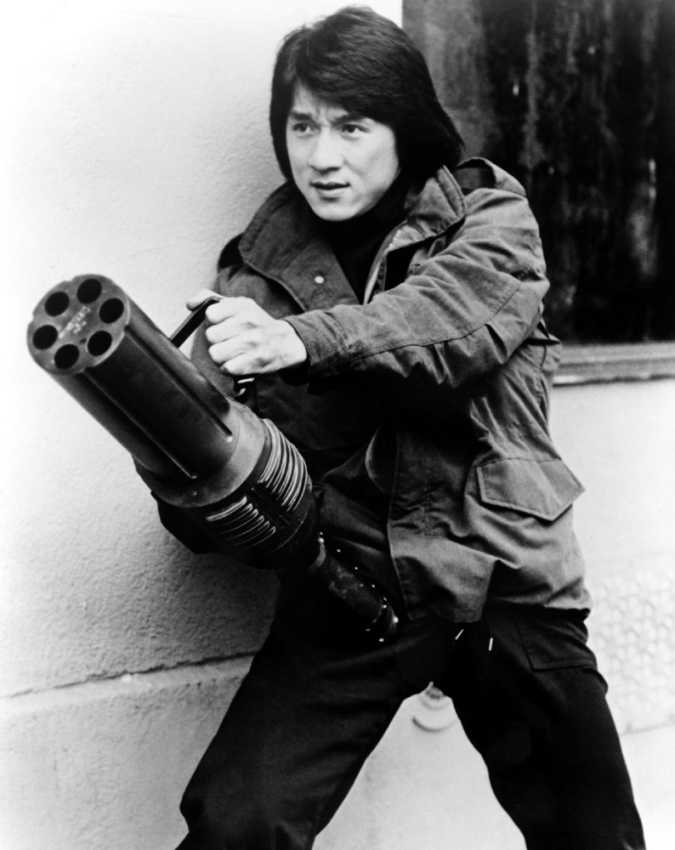 Jackie Chan’s bad week continues. Last week, he drew everyone’s ire by speaking out against Hong Kong protesters; this week, the charismatic movie star is being investigated by cops for off-the-cuff remarks he made in a print interview about using firearms to fight off triad members.

Chan made the revelation in an interview with the Guangzhou-based magazine Southern People Weekly saying that many Hong Kong actors were once bullied by local mafia-style gangs, and only he dared to confront them.

“I was at dinner once when more than 20 people with watermelon machetes surrounded me. I had three guns with me and told them that they had gone too far,” the magazine quoted him as saying.

Chan said after that he even brought two guns and six grenades with him.

Police, instead of focusing on the part where a gang of 20 people with machetes tried to kill Jackie Chan, fixated on the guns and grenades. In their defense — guns and GRENADES:

If the story turns out to be true, he would have blatantly breached gun-related regulations and if it’s not he could be in trouble for spreading misleading information to the public, said the spokesperson.

According to gun laws in Hong Kong, a license is required to carry a firearm. It is not known if Chan had ever been issued a gun license by the Hong Kong Police Force.

Chan, who’s been doing a lot of backtracking recently, gave a most bizarre statement to the public:

“I told the media about my unruly behavior to express that I had the thought of resorting to violence because of my lack of education. I cannot express myself properly sometimes, I only want to say that people need discipline, and our government should manage the public and resources in a fair way,” Chan responded on his verified Sina Weibo Thursday.

“I know the more I explain, the more questions will be asked about me,” he added.

“I cannot express myself properly sometimes.” Like, now? “People need discipline”? “Our government should manage public and resources”? What are you saying, man?

South China Morning Post has more Chan quotes, which we’ll pass along because they’re amusing, since Chan is obviously entering that stage in his career where the number of fucks he gives is zero.

“In the past, when they bullied me, I hid in the United States. They opened fire at me once I got off the aeroplane. From that moment on, I needed to carry a gun every day when I went out. When I returned to Hong Kong and ate outside, more than 20 people surrounded me with melon knives,” he said.

“I pulled out a gun, and had two more concealed. I told them they had been going too far and that I had been hiding from them. Later on, I confronted them with two guns and six grenades,” he was quoted as saying.

…”As long as there are people, there are thieves,” he said. “If you can get away with gold from HSBC without hurting anyone, that’s wonderful, and I think you are a genius. But it is unforgivable to injure anyone if you hold hostages.”

2 Responses to “Jackie Chan Says He Fought Off Gangsters With Guns And Grenades, Now Being Probed For Illegal Firearm Ownership”