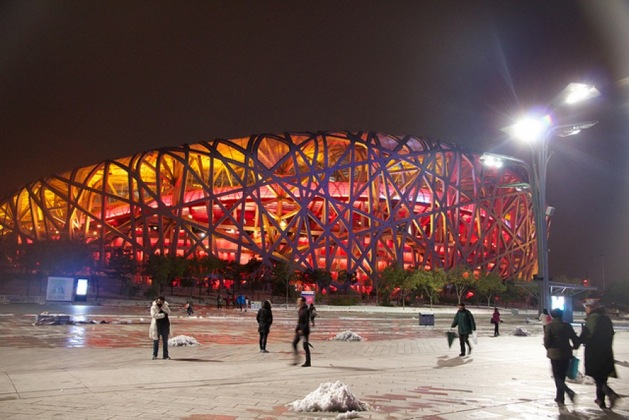 Why yes, it did snow today in Beijing. Photo by Marko Kudjerski via China Digital Times

Wow, did anyone else catch the Beijing-Xinjiang CBA game tonight? What a finish! Stoked links.

“Just sisters.” “Faced with a sex scandal of breathtaking tackiness, a Chinese police district could be forgiven for feeling perhaps a flicker of relief last week when someone in the office stumbled on what must have felt like good news under the circumstances—a detail that, at last, would not add to the humiliation heaped upon the brave men and women in blue in the county of Usu. // Sure, the background of the case unfolding in the department in northwest China was unchanged and, let’s face it, unhelpful: Police Chief Qi Fang had, indeed, been found embroiled in a pair of simultaneous love affairs with two women, who worked for the police department and whom he had promoted through the ranks, while keeping them in a luxurious apartment, paid for by the public treasury. But the department came upon what it took to be a redeeming detail, and it was determined to correct the record. And so a police source made sure that the important revision was made known to China’s state press, which printed it the next morning in newspapers across the land: The police chief’s two mistresses were not twin sisters! They were just sisters.” [Evan Osnos, The New Yorker]

All about Mo Yan:

Ministry of Truth: what’s acceptable to report and what’s not. [China Digital Times]

“In the People’s Liberation Army.” [The New York Review of Books]

“The burning issue.” [Analects, The Economist]

Laowai Style creator goes on the record. “Oftentimes, Chinese television stations use foreigners in their shows to make the show seem ‘fun.’ The producers know that Chinese audience enjoy seeing foreigners dance and sing on television; it is a well-tested, safe way to increase viewership. When a producer from Anhui Satellite Television approached Appell about shooting a segment on ‘Laowai Style,’ the producer asked, ‘We loved Laowai Style. What else can you do? Can you do other dances? Can you sing anything by Jay Chou? Is it OK if we make some changes to the lyrics of Laowai Style?’ When it became clear that the Anhui station was uninterested in the message of the Laowai Style video, Appell rejected their offer.” [Tea Leaf Nation]

Okay, time to say it: Stephon Marbury is awesome. “Becoming a fixture in the Chinese culture has been a journey of love for me. I can’t believe how many years I have lived here – Jan 27 will be my fourth anniversary. // I remember how tired I was when I first arrived in Shanxi from the United States. The flight was 13 hours, and when I got off the plane, all I could think was how cold it was. I was so cold I felt a chill all the way to my bones, even through several layers of clothing. // Truthfully, I only felt that way for a minute. That’s because so many Chinese people had come to the airport to welcome me here, and that just warmed my body and my heart!” [Stephon Marbury, China Daily]

“Just” one year?? “A man who wined and dined a women the night he first met her on a subway in Guangzhou has been convicted of rape for failing to use a condom during their one night stand, according to The Daily Sunshine. // However, his sentence is just one year.” [The Nanfang]

Reasons to love New York: “Because the Guy Next to You At the Coffee Shop Might Be a 29-Year-Old Poetry Scholar From Beijing Translating the Works of Allen Ginsberg Into Mandarin.” [New York Magazine]

Xinjiang hijackers sentenced to death. “A court in Xinjiang Uygur Autonomous Region on Tuesday sentenced three men to death and another man to life imprisonment after finding them guilty of attempting to hijack an aircraft in June.” [Xinhua] 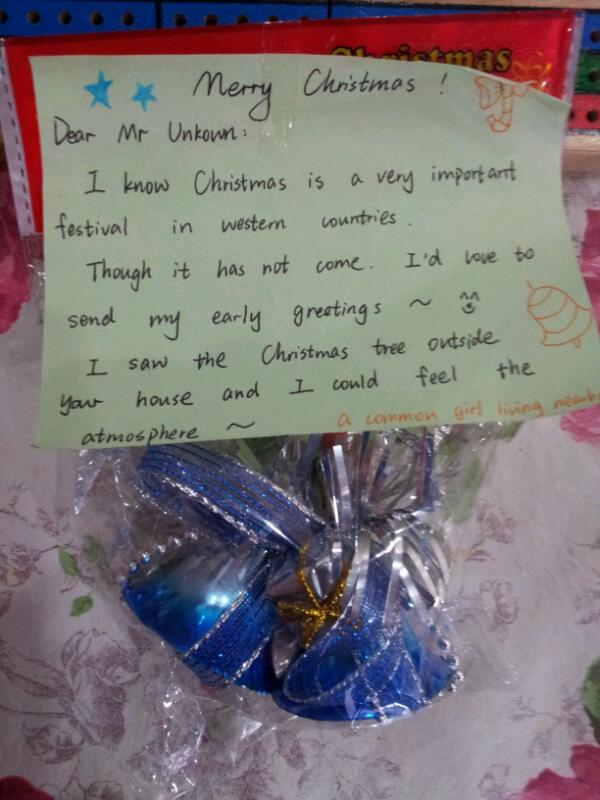 Via Reddit: “Last weekend the wife and I put up a big xmas tree in front of our shop. Today this was hanging on the door. Made me very happy.”