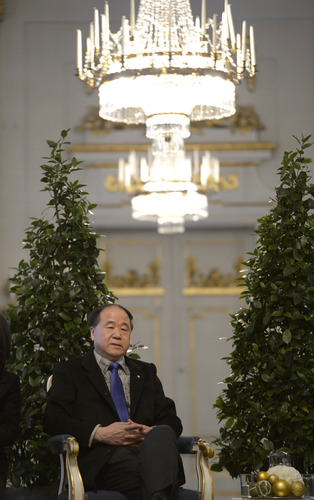 As Mo Yan prepares to speak in Stockholm — in less than 10 minutes, at 12:30 am local time, barring delays — the piece you should read if you haven’t already is Kenyon College assistant professor Anna Sun’s essay in the current issue of The Kenyon Review. Here’s an excerpt from “The Diseased Language of Mo Yan“:

Is “hallucinatory realism” the next, improved step of “hysterical realism”? The Latin root of “hallucination” refers to “a wandering of the mind,” and hallucinations are often described as dreamlike sensory experiences that have no relation to reality, which exists only in the imagination. It is reality heightened and transformed. Instead of an aimless velocity found in hysterical realism, here we expect a natural lavish flow of impressions, an extravagant and reckless expansion of the literary imagination. One imagines that the language of such hallucinatory realism must be fluid, colorful, affecting; it might even be extraordinarily so.

The kind of reality Mo Yan depicts in his impressive oeuvre might indeed be “hallucinatory reality.” The characters in his novels engage in struggles with war, hunger, desire, and nature; it deals with brutal aggression, sexual obsession, and a general permeation of both physical and symbolic violence in Chinese rural life. But unlike the great novelists who grapple with the harsher side of the human condition – Dickens, Hardy, and Faulkner, for example – Mo Yan’s work lacks something important which these authors have, although it is seldom spoken of: aesthetic conviction. The aesthetic power of these authors is the torch that illuminates for us the dark and painful truth of humanity. The effect of Mo Yan’s work is not illumination through skilled and controlled exploitation, but disorientation and frustration due to his lack of coherent aesthetic consideration. There is no light shining on the chaotic reality of Mo Yan’s hallucinatory world.

Mo Yan’s language is striking indeed, but it is striking because it is diseased. The disease is caused by the conscious renunciation of China’s cultural past at the founding of the People’s Republic of China in 1949. Mo Yan’s writing is in fact a product of the aesthetic ideologies of Socialist China. As Mao Zedong 毛澤東 (1893-1976), the leader of the Chinese Communist Party from 1934 until his death, famously said in his seminal speech “The Yan’an Talks on Literature and Art” in 1942, a few years before the Party founded the People’s Republic of China in 1949: “Proletarian literature and art are part of the whole proletarian revolutionary cause; they are, as Lenin said, cogs and wheels in the whole revolutionary machine.” As a result, Mao demanded writers in the socialist regime write for the masses: “China’s revolutionary writers and artists, writers and artists of promise, must go among the masses; they must for a long period of time unreservedly and whole-heartedly go among the masses of workers, peasants and soldiers, go into the heat of the struggle. Only then can they proceed to creative work.” Not any kind of creative work, but work that serves the “proletarian revolutionary cause.”

As a result, a new literary language was invented…

Notable local translator Brendan O’Kane calls it “the best one I’ve seen so far” about Mo Yan, and that’s about right.

5 Responses to “Probably The Best Piece On Mo Yan Yet: Anna Sun’s Essay On His “Diseased Language””