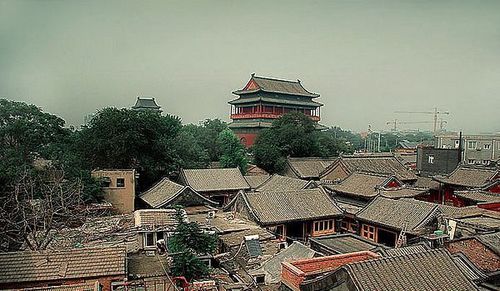 For the last three or more years, rumor’s swirled over “restoration” plans in the Drum and Bell (Gulou) neighborhood to create a large plaza or “Time Cultural City.” It looks like the local government and developers are finally going forward with it. Here’s AFP’s latest report on the subject, which actually gives a date:

Notices for the “destroy and evict” project are plastered throughout the quarter, dated Wednesday and saying the work was due to be completed by February 24.

Besides protecting the historic legacy of the capital, the project is also aimed at restoring and repairing old and dilapidated buildings, the notices said.

Compensation begins around 40,000 yuan per square meter, but can be negotiated. Between 130 and 500 homes will be destroyed.

“A lot of people are opposed to the campaign, 40,000 yuan per square metre is too cheap, especially with the price of housing in Beijing sky-rocketing,” said the manager of a coffee shop near the Drum Tower, who gave her surname only as Wang.

Others said they were happy with the compensation.

“We took the money,” said Zhou Li, 51, who was to move out to the suburbs with his elderly parents this weekend after living most of his life near the Bell Tower.

China is a complicated country.

In 2010, the Beijing Cultural Heritage Protection Center (CHP), which works to preserve historical neighborhoods around the city, reported that Gulou plans had been shelved.

“The halt buys us some time to really think about what’s best for both the residents and preserving history,” said Zhang Pei of the Beijing Cultural Heritage Protection Center.

We haven’t heard from them for a while. (We’ve reached out to them for comment and will update if we hear back.) In fact, the organization has gone off the grid recently; no tweet since February 6, nothing on Tumblr  or Flickr since last September, and a now-deleted Facebook page.

The Drum and Bell neighborhood has already undergone lots of changes, of course. The space between the two towers used to be a gathering place for locals who played shuttlecock or badminton. These days, it’s a parking lot, mostly for tour buses. It’ll bring more revenue into the district, which will (surely, ahem) be used in public works projects for the greater good. All it costs is a bit of history.