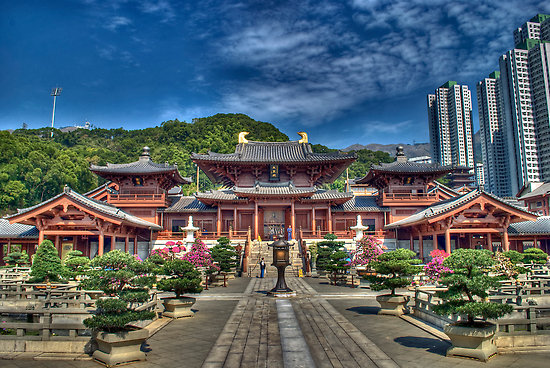 We have no question that Chi Lin Nunnery in Kowloon’s Diamond Hill is a beautiful complex, possibly one of the most beautiful temple complexes in Hong Kong. It is apparently 33,000 square meters of tranquility and natural splendor, with the main building buttressed by hills, ponds, orchids, and topiaries, all against a backdrop of soaring skyscrapers.

Here’s the thing though: it’s 14 years old, having been “completely rebuilt” in 1998 in the Tang style. Its age should probably automatically disqualify it as a potential Unesco World Heritage Site.

Or should it? Controversy is hard. SCMP:

The State Administration of Cultural Heritage last month included Chi Lin – at the nunnery’s request – on an updated shortlist of potential heritage sites. Beijing chooses sites from the list and proposes them to Unesco.

The [Antiquities Advisory Board] was equally dissatisfied to learn that Hong Kong officials – without consulting the board – had endorsed the application and assisted their mainland counterparts’ visit to evaluate the nunnery in June.

Historian and board adviser Ko Tim-keung said yesterday that he had been surprised to read about the national heritage list in a newspaper. “I could never imagine that this 14-year-old building, a fake antiquity, could represent Hong Kong. There are other sites in the city that deserve the status a lot more.”

That’s quite the board there — so important to the government that a board adviser is left to find out from the newspaper about World Heritage Site nominees.

The selection of a 14-year-old nunnery is in effect a wasted pick. Board members are probably right to doubt that Unesco will ever place it on its official list.

Then again, pardon me for saying so, but the board members don’t seem like the type who could have reached a consensus anyway:

Meanwhile, the board agreed on a government plan to declare the Cenotaph in Central’s Statue Square an official monument.

However, Ko said that the Cenotaph had little to do with Hong Kong history. It was unveiled in 1923 to commemorate the British who left Hong Kong to fight in the first world war, in which the city played no part, he said.