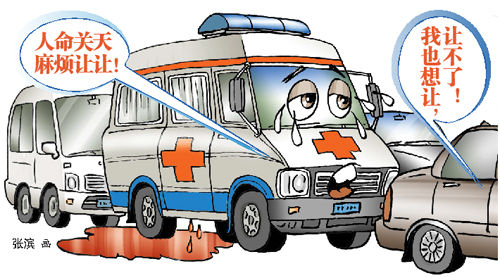 This should be everyone’s fear about living in a city with such crippling traffic. In Beijing on Friday, a woman in her 50s died in the back of an ambulance because it was stuck in a gridlock. How bad was it? According to the doctor, Wang Yuzhu, as reported by Sina:

“The scene of the accident is no more than 3 kilometers from the hospital, yet it took us a good 40 minutes to arrive there! Barely any cars made way for our ambulance! So woeful!” Wang wrote on Weibo.

That is horrific. The ambulance driver, Zhang Shaojun, said about half of drivers on the road typically never give way for his vehicle.

In Taiwan earlier this year, a somewhat similar thing happened where cars didn’t give way for an emergency vehicle carrying a victim who died en route. But I’m not sure if we can chalk up what happened in Beijing to callousness. The above cartoon sums it up:

Such tragicomedy, right there, modern and multifold. Wang adds:

Wang said the ambulance couldn’t get by. “Many cars were parked on bicycle lanes that night, making it impossible for us to proceed.”

“It is hard to say this really reflects on the lack of social ethics among the public, but I do hope that people won’t park their cars in emergency lanes, or in case of emergency, people could move aside a little,” she added.

“What cold-blooded souls they must be! How can you expect such drivers of little morality to make way for ambulances?” said Internet user Heikaixin.

Some, however, noted that the misuse of “privilege vehicles” like police cars using their sirens without having any emergency has led to the mistrust or even disgust among the public.

“I have to say that many ambulances and police cars misuse sirens even without any emergency tasks. The true murderer of the woman is the loss of trust,” added user betty-lmw.

Wang refuted the rumors of misuse of sirens by ambulances, saying that their vehicles are supervised by the central command center and they only use sirens when it is really necessary.