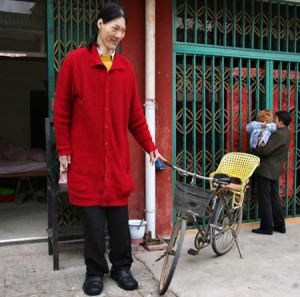 Yao Defen, who grew to be 7-foot-8 (2.34 meters) due to a tumor in her pituitary gland, died on November 13 in her hometown of Zhucheng, Anhui province. We’re not sure why it’s taken three weeks for reporters to get around to this story, but here it is on Daily Mail, etc.:

A neighbour recalled how on the morning of Yao’s death, her widowed mother came running out of the family house .

The woman, named only as Zhang, reportedly said: ‘It was 9am in the morning, just after breakfast, when her mother shouted that the girl was hurt.

‘People immediately rushed over to their home. I saw Yao lying on the bed – she wasn’t breathing.

‘Later, her sister arrived and the doctor soon confirmed her death. Her sad mother cried then fainted.’

The Guinness Book of World Records didn’t recognize Yao as the world’s tallest woman until its 2011 edition, according to this website for giants. American Sandy Allen had held the distinction until her death on August 13, 2008.

She had actually undergone surgery to remove part of her tumor, but it wasn’t completely successfully. Apparently the family didn’t have enough money for a second try.

We’re informed that Yao made a living by traveling with her father and performing. Her mother wasn’t exactly normal-sized herself: at 4-foot-8, she would’ve measured on the short side. 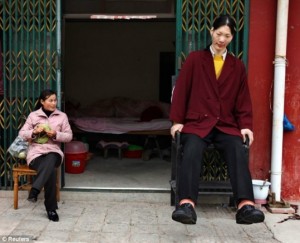