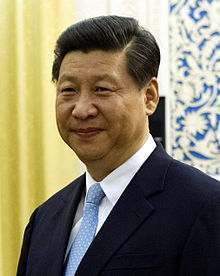 CPC top dog Xi Jinping wants to lead by example. “The style of officials, particularly top officials, has an important impact upon the style of the Party and the style of the government and even on the whole of society,” according to a recently released statement. “Such a way of doing things must first start with the Standing Committee.”

Xi specifically targeted two areas in which the Party’s excesses can be curbed: over-the-top welcoming ceremonies and wordiness in speeches. No more pomp, no more empty, time-filling talk.

According to Shanghai Daily (above link):

Visits around the country by top leaders should no longer be met by red carpets, welcome banners or banquets, said a statement after a meeting of the 25-member Political Bureau of the Party’s Central Committee.

Meetings must be shortened and empty talk banned, the statement said.

One staple of foreign visits always shown in detail by state television will also go – airport welcoming parties made up of students and residents. Gone, too, will be the hordes of trailing functionaries on such trips.

A wise skeptic will have reason to doubt whether Xi’s comrades will so easily break their habits, but if they do, this will have been a good first step. It’s a small, almost inconsequential step, but it is one nonetheless. If Xi is to be the great reformer we all want him to be, he had to start somewhere. Why not here?

UPDATE, 6:23 pm: Wall Street Journal‘s article on the same subject is worth a read as well:

New party chief Xi Jinping chaired the meeting, which seemed to reinforce an image served up at an unusually informal gathering of the Politburo’s Standing Committee – the party’s top seven leaders – just last week. That nationally televised gathering showed the leaders dressed in casual attire, and Mr. Xi speaking in an off-the-cuff manner that conveyed the impression of a more relaxed style compared with the often stiff and formulaic delivery of his predecessor, Hu Jintao.

While it remains to be seen how much of this effort is real and how much muscle is actually applied to breaking the ingrained habits of China’s stodgy ruling party, this was at least a call for action that had some striking departures from the past.