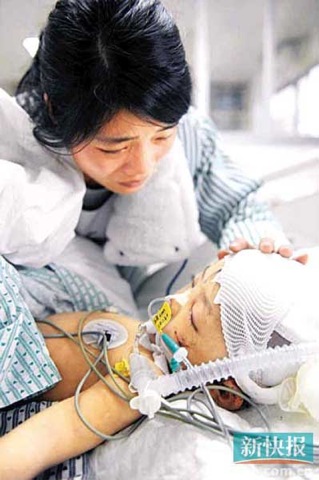 Sad news out of “China’s Florida” once again.

According to Jinyang Net, a three-year-old girl named Xu Lijia has died from brain failure as a result of head trauma in Qingyuan, Guangdong province. A 35 year-old female suspect surnamed Zeng from Huaihai, Hunan, the girlfriend of the girl’s father, confessed to the crime; owing to the fact that she’s pregnant, she has been released according to Chinese law and is free on bail.

Lijia’s injuries were very severe. A few days before New Year’s Eve, she suffered from headaches, vomiting and loss of consciousness; however, the family only noticed the next day when her condition worsened. She was taken to Qingyuan People’s Hospital that night.

As described by the director of the No. 2 Intensive Care Unit of the hospital, Lijia suffered from:

…a hematoma on the upper left side of the forehead resulting in hemorrhaging of the skull, a broken left occipital bone resulting in a drop in density of the left hemisphere of the brain, and was under suspicion of hydrocephalus.

She succumbed to her injuries on Monday after losing brain function two days prior. She was only 35 months old.

In her short time, Lijia didn’t appear to have a happy life. Born out of wedlock, her mother, “Xiaolu,” now 22, was forced to give up her child when Xiaolu’s father refused to accept her into their family. Lijia’s father, 41 year-old Mr. Xu from Hengyang, Hunan, migrated to Guangdong to work in construction projects. Since Xu was often busy at his job, he trusted Lijia’s care to hired nannies.

Then Xu met Zeng last May; the two became romantically involved and quickly co-habitated, resulting in a pregnancy in July (again, out of wedlock). Miss Zeng is reported to have originally treated Lijia well, but would later be seen hitting the child on a regular basis, as reported by neighbors. Xu found the change in his girlfriend inexplicable, calling her (ultimate diss) “crazy.”

Xiaolu said that she would often see Lijia with marks on her face; the toddler was described by her family and neighbors as “quiet, withdrawn” and “never happy or smiling.”

A lawyer consulted for the original story states that since Miss Zeng is not the child’s parent, she is legally culpable for homicide and doing “intentional harm.” If convicted, she faces from 10 years to a maximum of life imprisonment or even capital punishment.

Due to Zeng’s pregnancy, however, the trial has been postponed under after she gives birth later this year.