A 20-car rear-end chain collision yesterday morning on the Hang-Pu Highway between Hangzhou and Haining, Zhejiang province resulted in two dead and at least eight injured.

The Jiaxing (prefecture-level city in Zhejiang) Fire Brigade said there was a “thick fog” at the time of the accident, and visibility was further hindered by smoke from burning stalks.

The “fog” may or may not have been the same kind that caused residents to not notice a burning factory for nearly four hours on Sunday night. That fire, in fact, also happened in Hangzhou, just one day before this traffic accident. 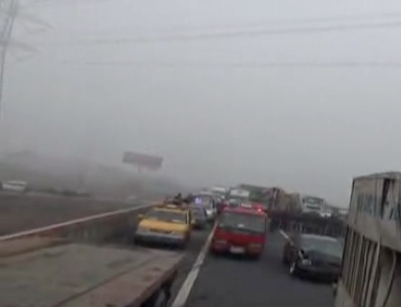