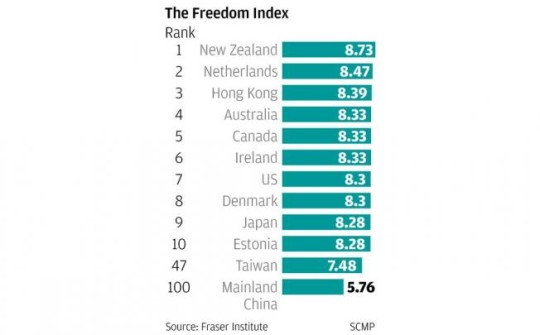 I’m guessing if you’re not a businessperson, you’ll likely disagree with a recently released ranking by leading conservative Canadian think tank Fraser Institute that places Hong Kong above the US, Canada, and all Scandinavian countries in terms of “human freedom.”

In Towards a Worldwide Index of Human Freedom, the institute “focuses on creating the first comprehensive and conceptually consistent index of freedom, including economic freedom, and is based on the ‘negative’ definition of freedom—in other words, the absence of barriers or coercion that prevent individuals from acting as they might wish.” (We should note that the report was also sponsored by Germany’s Liberales Institut.)

Unsurprisingly for an organization whose vision is “a free and prosperous world where individuals benefit from greater choice, competitive markets, and personal responsibility,” the Fraser Institute ranks Hong Kong very high on economic freedom — 9.02 out of 10 — so high, in fact, that it offsets a weak “personal freedom” score of only 7.8 to vault Hong Kong to No. 3 on the overall list.

What Fraser is proposing should make the leaders in mainland China beam: that politics really doesn’t matter because personal liberty and “freedom” is defined by one’s ability to become rich. As long as politicians enable that pursuit — is it here that we mention Hong Kong citizens don’t have the power to choose their own leader? — nothing else matters.

Well, almost nothing. Mainland China ranks 100 out of 123 (personal freedom score of 5.1, economic freedom score of 6.44), just above the Republic of Congo, Niger, Sierra Leone, and Nigeria, and below Malaysia, Senegal, Nepal, Egypt, Tanzania, and Uganda.

You can find the complete list here, along with notes on methodology. 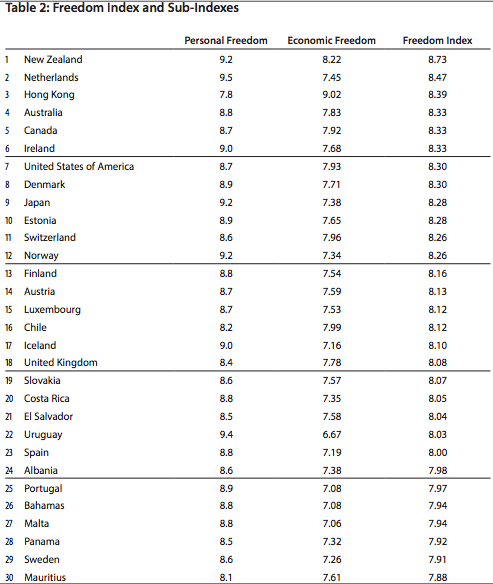 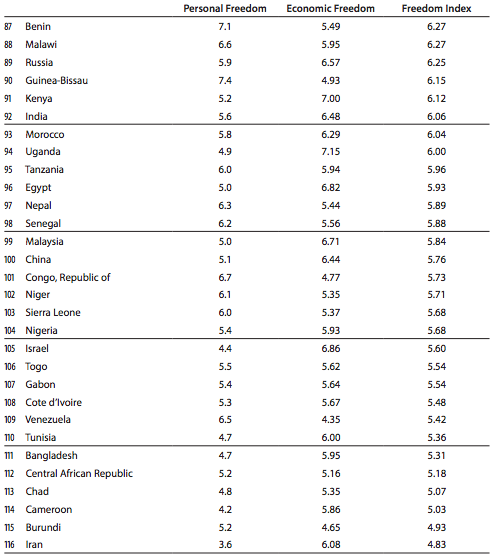 Leave a Reply to trader joe