Police estimate that about 2,600 protesters participated in a pro-government rally in Hong Kong on Sunday (or “as many as 40,000,” if you believe organizers). It was the first half of a doubleheader of protests, with the nightcap coming yesterday — the anti-government variety — attended by 17,000, according to police. (In proportional hyperbole, organizers declared 130,000 people showed up.)

Considering the violence on Sunday, the safe bet was that there’d be at least one confrontation yesterday. Sure enough, as AFP reports:

A group of 400 anti-CY Leung protesters were engaged in a stand-off with police in Central on Tuesday night, after they attempted unsuccessfully to surround the Government House .

The anti-CY Leung protesters were blocked at the junction of Queen’s Road Central and Ice House Street as they tried to march to the gate of the Government House in Central.

The protesters were mainly from the Anti-CY Alliance members, made up of members of the People Power party and various advocacy groups.

The blockage caused a traffic jam in the area for about 40 minutes.

A sizable portion of the Hong Kong populace has always been unhappy that CY Leung took office without being democratically elected, and remains in power largely thanks to Beijing-appointed legislators who narrowly declined to give him a vote of no confidence last month. Hong Kong resident Calvin Tse, as quoted in Voice of America, sums up the discontent:

“Under the current mechanism, no matter how much we dislike the chief executive, we cannot make him step down. So, I am forced to come out to ask him to step down,” Tse explained. “We don’t even have a vote, he is elected by a small group of people. We cannot use our voting right to express our view no matter what his performance is like.”

And make no mistake, some Hong Kongers very much dislike Leung. Immediately after he was elected (by delegates) in March, people were making allusions to Hitler. Let’s see what creative ways they managed to vilify him this time: 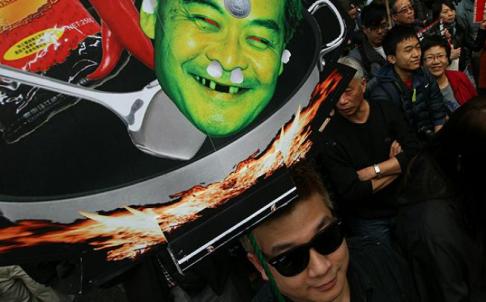 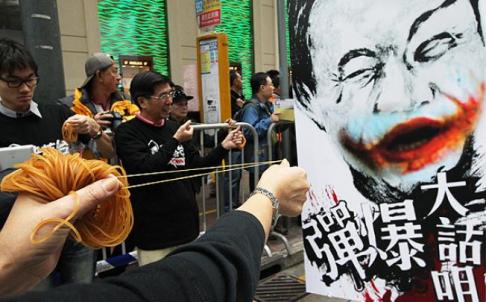 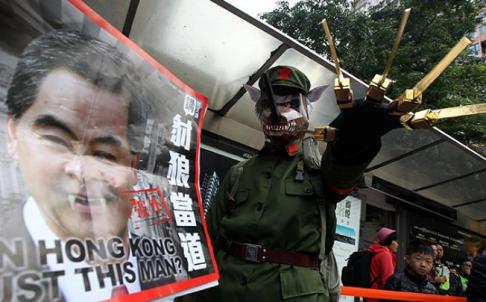 One Response to “Leung Chun-Ying Is A Werewolf, A Green Monster, And The Joker: Picture Evidence That Hong Kong Dislikes Its Chief Executive”