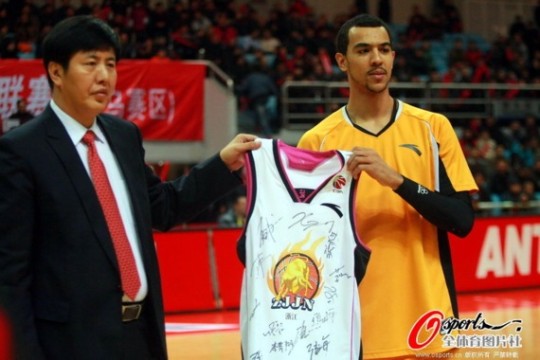 Chinese Basketball Association (CBA) said in a statement that the point guard, playing for Shanxi, was banned for six months and the club was fined 10,000 yuan (about 1,500 U.S. dollars) following his positive test on Dec. 9.

“We should learn from this lesson, to conduct more tests, to improve our regulations. We won’t tolerate doping,” it said in the statement.

Let’s be clear what we’re talking about here: pot. It’s not a performance enhancement drug, and it’s barely illegal in many parts of North America. But one case of it in the CBA and suddenly everyone’s all, We should conduct MORE tests, improve regulations. Why is this a bigger issue than, say, point-shaving, and shitty refereeing?

“The truth is there were not many tests done in the basketball league,” said Zhao Jian, vice director of CHINADA, adding that a total of 12 tests were conducted by far this season.

Twelve tests. Total. And the league’s leading scorer on one of the most controversial teams in the league — Shanxi’s owner, “Boss Wang,” is the type to not care about upsetting others — just happens to get caught? Something seems a bit fishy.

For the record, state media has talked about cannabis in such terms before, when an Olympic judo fighter was expelled for “doping.”

Williams was averaging 30.9 points, 6.2 rebounds, and 5.2 assists per game for the 11-4 Shanxi Brave Dragons, currently a game out of first place. The team will now try to find another foreigner to replace him, as Williams’s six-month suspension will last through the end of the season. The other foreigner on the team is Charles Gaines, averaging 29.2 points and 14.3 rebounds, who together with Williams formed the league’s most formidable duo. The former Arizona standout will be missed.