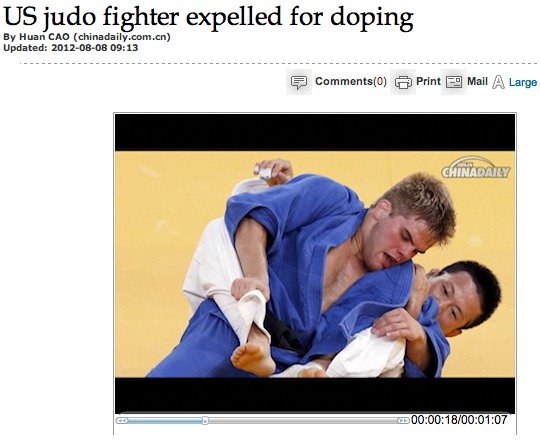 Journalists are fed a lot of crap by the world. Specifically by public relations flacks and sources, but really, the world at large, because we’re surrounded by crap, by fetid logs of horse and other rancid mammalian shit dripping with stupidity and awfulness.

It takes a decent journalist to filter that shit and present it in a way that is digestible to a halfway intelligent and educated human being. It means processing a piece of information in such a way that gives everyone else a little credit for not living in a cave of fecal stalactites.

Nick Delpopolo, 23, is the first of the 10,500 games Olympic athletes to fail an in-competition doping test.

His case is the fifth positive test for a banned substance reported by the IOC (International Olympic Committee) since its official London Games testing period began in mid-July.

The other four athletes were caught before competing.

Huh. You didn’t think that bit of info was relevant, China Daily? Here we have an illustration of a neat trick of journalism, specifically media. You can turn a story about one thing into another simply by withholding information. A story that deserves to be about IOC’s incredibly outdated drug-testing policy that considers cannabis a performance enhancing drug is, on China Daily’s pages, a story about the disgrace of an American Olympian who is only the fifth athlete to test positive for a “banned substance,” and the first since the London Games began.

American judo fighter Nick Delpopolo was expelled from the Olympics for doping Monday, saying he unintentionally ate something before the games that had been baked with marijuana.

The incident is such that it’s inspired fresh rounds of debate on whether cannabis should ever even be banned in the first place. Reuters:

And many wonder whether the expensive time and effort of sporting drug testers might be better spent catching serious cheats who top up their blood with EPO or pop anabolic steroids to boost testosterone levels and muscle growth.

“There’s no evidence cannabis is ever performance enhancing in sport, and since its use is legal in a number of countries, there’s no reason for it to be banned by WADA,” said David Nutt, a professor of neuropsychopharmacology at Imperial College London.

“I can’t think of any sport in which it would be an advantage. And it seems ludicrous that someone could quite legally smoke cannabis in Amsterdam in the morning and then come over to London in the afternoon and be banned from competing.”

No, we won’t be finding this kind of rational discussion in China’s leading English-language newspaper.

To be fair to China Daily, I’m sure several small- and medium-market US papers have excised the conversation in the same way, and editors at more than a few publications probably equate marijuana with a performance enhancing drug, or at the very least, a dangerous and illegal drug. It’s these people who stink up the world by living in their holes of poop ejaculate. It’s these people for which China Daily writes.