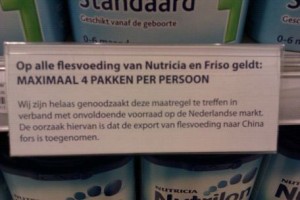 Mothers in Hong Kong have been complaining (again) that they can’t get sufficient milk powder for their babies because mainland shoppers are buying the powder in bulk.

According to the Census and Statistics Department of the Hong Kong government, last year the city imported more than 37,900,000 kg of baby milk powder. The government has already increased the import by more than 30% in recent months, but sadly that amount of milk powder can’t satisfy the increasing demand from mainland shoppers.

Thanks to the sharp increase in demand, the price of milk powder has risen about 10-15% in Hong Kong. But even if you have the money, you have to compete with the Chinese shoppers who, instead of doing the hard work themselves, hire local elderly people and housewives to queue outside supermarkets and retail shops to wait for new supplies. Rate? HK$20 per can, according to a local newspaper. And the Chinese shoppers then resell the milk powder back on the mainland. Brilliant.

Hong Kong isn’t the only place where this is happening. Media in the Netherlands and Germany also report that Chinese people sweep supplies of milk powder from shop shelves, triggering countrywide shortage.

The backlash has been predictable. We know that food safety in China is rubbish, but please, people say, don’t try to solve your problems by robbing other people’s resources and causing unnecessary global panic.

19 Responses to “Got Milk? You Must Be A Shopper From The Mainland”